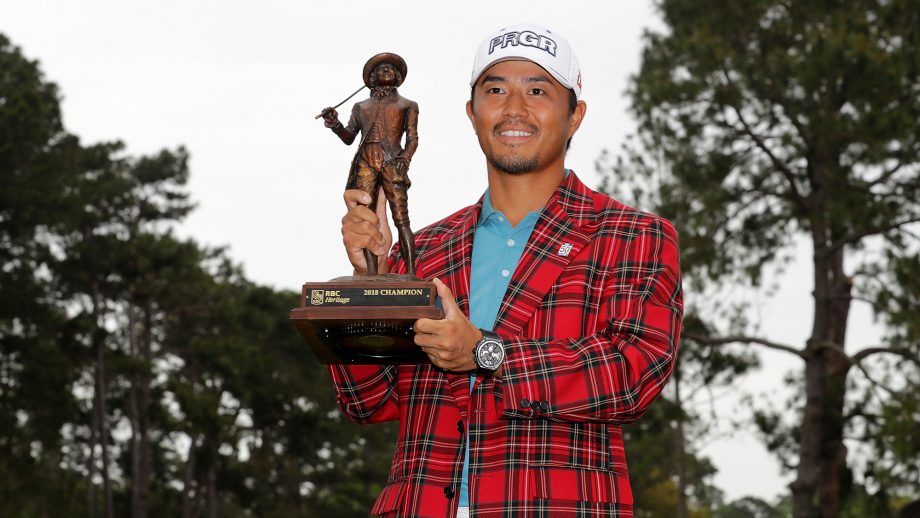 HILTON HEAD ISLAND, SC - APRIL 15: Satoshi Kodaira of Japan poses with the trophy after winning on the third playoff hole during the final round of the 2018 RBC Heritage at Harbour Town Golf Links on April 15, 2018 in Hilton Head Island, South Carolina. (Photo by Streeter Lecka/Getty Images)
Brian Lee

HILTON HEAD ISLAND, S.C. – Early on, Satoshi Kodaira was thinking only of playing well enough Sunday to make it to next week’s PGA Tour stop.

Those worries are over for the 28-year-old from Japan, who rallied from six shots behind to win the RBC Heritage in a playoff and gain an invitation to join the tour as a regular.

“This is a stage I’ve been dreaming about,” Kodaira said through an interpreter. “And having this opportunity to play full time is a dream come true. So, of course, I will accept full-time membership.”

Kodaira defeated Si Woo Kim on the third playoff hole, rolling in a 25-foot birdie on the par-3 17th hole, then punching his fist in celebration. It ended a drama-filled final round in which it appeared that Kim, Ian Poulter and Luke List had the lock on the title at different points.

But it was Kodaira’s relentless grind to the top that won the day. And with the game he showed at Harbour Town Golf Links, Kodaira appears like he’s got more big moments on tour ahead like countryman and five-time tour winner Hideki Matsuyama.

“I feel like I’m getting closer to that level,” said Kodaira, who is ranked 46th in the world and has played in 15 tour events. “I’d like to do my best in major championships and, hopefully, work hard at it.”

Bryson DeChambeau (66) and List (72) were tied for third. Third-round leader Poulter’s bid for a second tour title in three weeks ended with a 75 and a tie for seventh.

Starting times for the final round were moved up because of a forecast for bad weather.

The tournament appeared in steady hands with Kim, whose bulldog focus and shot-making held everyone off to win The Players Championship last May. But the 22-year-old from South Korea faltered over his final nine holes of regulation, with three bogeys to fall into the tie with Kodaira.

Kim had the chance to win in regulation but missed a six-foot birdie putt on the 18th hole. Kodaira said that was the most nervous he was during his wait of about an hour before the playoff.

Kodaira might have had a few butterflies on the final playoff hole as Kim had a 21-foot birdie try to extend things, but he came up short.

Kim thought the increased winds slowed down the greens, making putts more difficult on the final nine holes. “But I tried my best and the putts didn’t drop,” Kim said. “It is what it is.”

Poulter, who dramatically won the Houston Open two weeks ago for his first tour win in more than five years, had six bogeys Sunday after making just two in his first three rounds.

Playing Harbour Town for the first time, Kodaira opened with a 73, then followed with the tournament’s best round of the week, 63, on Friday. That game kicked in once more in the final round, with six birdies on the way to the playoff.

DeChambeau, the 24-year-old second-round leader who fell apart with a Saturday 75, bounced back Sunday with a 66 to finish two shots back. His roller coaster of a tournament played out again in the final round as he rose three shots to 9-under, then fell back to 7-under before closing with consecutive birdies on the 15th, 16th, 17th and 18th holes.

Dustin Johnson finished with his best round of the week, a 67, and tied for 16th, ensuring that he will stay at No. 1 in the world for at least the next two weeks.

He will take the next three weeks off, starting with a vacation to the Bahamas –“I’m headed there right now,” he said, smiling – until he returns to action at The Players Championship.

Johnson said his problem this season has been on the greens, calling his putting subpar from what he expects. He said he plans to work things out over the break and “will be ready for the Players.”

Storms forecast for late Sunday afternoon and early evening forced the PGA Tour to move up start times to 7 a.m., with the leaders going off about two hours later. The weather, while overcast and windy at times, remained calm enough to get in the final round without disruption.