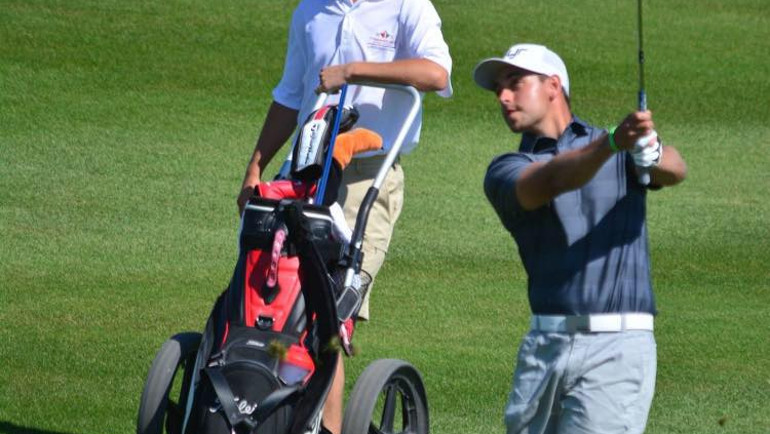 Danny Klughart will uphold a long time promise to a friend at next week's CP Women's Open.

Prince Albert’s Danny Klughart has a long time promise to fulfill to a good friend.

Next week during the CP Women’s Open, Klughart will caddy for Saskatoon’s Anna Young who received an exemption into the event in her home province. Klughart has been friends with Young since their junior tour days over a decade ago. He said Young worked out the deal long ago.

“Anna and I grew up together, we would travel together to the junior tournaments when we were 12 and 13 years-old. Our moms are good friends, she always joked I’d caddy for her at her first LPGA event, so I have to hold up my end of the bargain,” he joked.

Young is currently playing on the Symetra Tour in the central United States picking up her second professional win earlier this season. She is also a five-time Saskatchewan Amateur Women’s champion, her last coming in 2015 at Elk Ridge Resort. Klughart said he is proud of what she has accomplished in the game.

“It’s awesome, she’s really trying to endorse the game,” he said. “She really inspires a lot of junior golfers around the province. Not only them but the women, myself and other players in the province follow her down there. It’s just exciting to see someone so close to home doing so well for herself.”

Klughart has been involved in the sport his entire life, he said he started riding his dad’s cart carrying a putter before advancing to more clubs and lessons as a six-year-old in Prince Albert. He got his first membership at nine and hasn’t looked back. He qualified for the Canadian Mid-Amateur Championship in Victoria, B.C. through the Saskatchewan Men’s Amateur Championship earlier this year but the schedule conflict is keeping Klughart in Saskatchewan. He knows there will be more opportunities to earn a trip to the men’s event and is excited to share the LPGA experience with Young.

“She doesn’t really need me for advice on the course, but I think having someone she’s comfortable and familiar with will keep her relaxed for the week. I hope I can keep her focused when she needs to be and kind of light when she needs to be, I think it will be good,” he said.

Klughart has played the Wascana Country Club on a couple of occasions including the Regina City Amateur. He also caddied for Brad Phelps at last year’s Canadian Mid-Amateur Championship.

He will travel to Regina on Monday night and begin working with Young on Tuesday. During the first of two Pro-Am events coinciding with the tournament Young’s father will caddy for her, that will take place on Monday.

You can hear more from Klughart who spoke with Golf Saskatchewan’s Clark Stork on Friday.