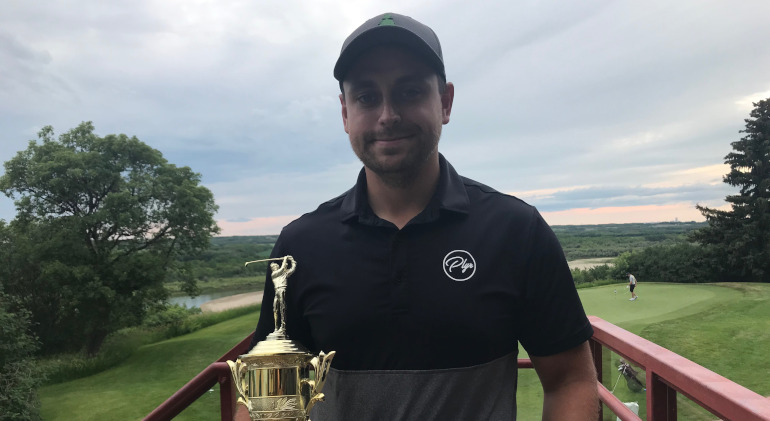 Danny Klughart has cruised to his second Order of Merit (OMT) event championship of the season winning the Scotia Wealth Management Saskatoon Amateur Golf Championship this past weekend.

The Cooke Municipal Golf Course member is coming off a win at the Lobstick a few weeks ago. Klughart jumped out to a huge lead during the amateur on Saturday striking a seven-under, 65 at Dakota Dunes Golf Links. That tied his career tournament low round. He said everything went right on day one of the 36-hole event.

“I had a really good round,” he chuckled. “I hit the ball really well off the tee, I hit most of the fairways and my wedge game was pretty dialled in. I made lots of birdies but they were all inside ten feet except one so that was nice.”

After the first day Klughart had a five-shot lead on Ty Campbell and Jehremy Ryde and a six-stroke cushion on David Stewart. Round two of the event moved to Riverside Country Club where he went one-under, 71 to hold off the field and win by five shots. Klughart said he knew shooting near par would likely seal the victory.

“My goal was to shoot under par on Sunday, I figured if I did that it would be very tough for anyone to even tie me,” he said. “It would have taken Ty or Jehremy six under and Dave seven under to tie me if I shot under par so I figured that would be a pretty safe bet.”

Despite the five-shot win, Klughart admitted changing venues halfway through the tournament did allow for the chasers to claw back.

“I actually think that kind of opened the door,” he explained. “At Riverside you need to know the lines and just putting on the greens can be quite challenging so guys that play there everyday kind of have an advantage. If Ty could have made a few more putts on the front nine he would have been right there with me because he was hitting the ball well. Jehremy and Dave were under par on the front nine so it wasn’t far off from being a close back nine, they had some trouble and I made a few birdies and got my big lead back.”

Campbell finished at 141, Ryde carded a 142. Last weekend’s winner at the Reliance Gregg’s Central Amateur, Roman Timmerman placed fourth at 143, Stewart rounded out the top five at an even par, 144. The complete results can be seen here.

Next up on the men’s OMT is the Saskatchewan Men’s Amateur and Mid-Amateur Championships at the Saskatoon Golf and Country Club from July 16 to 18. Klughart said his game is where it needs to be to contend for either championship.

“I feel really good,” he said. “I am kind of getting back into it after taking a few weeks off. I’m going to continue to work on the things I was before. I am really trying to get my distance control, and my putting. I have been working on those two a lot, it seems to be helping my wedge and iron game. I am just trying to be pin high and that is really helping my game.”