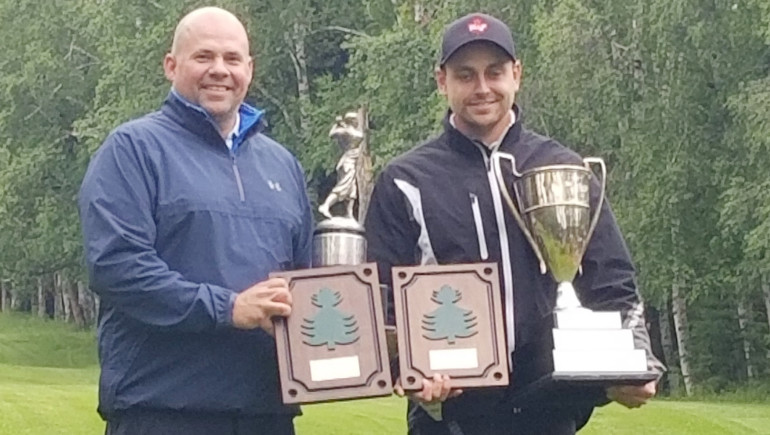 It was a clean sweep at the Lobstick in Waskesiu for Prince Albert’s Danny Klughart.

The Cooke Municipal member won the open portion of the tournament as well as the match play event taking down Delisle’s Colin Coben in the final match on June 15. Klughart has had a great start to the season, he was fourth in the Legends 2 Man Scramble and finished in a tie for third in the Scotia Wealth Open. Klughart’s 1,475 Order of Merit (OMT) points has him on top of the standings early on. He said his game has treated him well early on this season.

“I have been hitting it pretty good off the tee. My iron game is always strong. I’ve been putting better than normal which is something I’ve been working on so that’s paying off. I putted really well at Waskesiu this week,” Klughart told Golf Saskatchewan.

He shot rounds of 70 and 67 during the open portion of the Lobstick to finish at minus-three, two strokes better than Pat Marcia and Jerry Christiansen. This is Klughart’s first open win after being second on three previous occasions.

“It’s super strange,” he said of the Lobstick format. “You are kind of playing conservative the first round because you just want to make the championship flight to set up the rest of the week but at the same time you are playing the open to win. I found in the past I was playing too conservative the first round and that’s all I was thinking about. I shouldn’t shoot above 76 out there and thinking that number isn’t likely the right way to go about it. I just tried to play the open as a two-day tournament instead of worrying about qualifying for the championship flight because I figured that would take care of itself.”

Still seeking his first open win Klughart said topping the stacked field was important to him.

“That was my goal going up there, I really wanted this one. The Lobstick and the Scotia Wealth are probably the two strongest fields with the pros playing in them, so it was my goal. I was really pumped to win,” he said.

Klughart started the match play portion with an 11-hole win over Gary Hagen. It took him 12 holes to defeat Doug Kozak in the second round. He felt fresh going into the Friday where the players play two matches, he downed Trevor Bloom in the morning and defeated Jason Galon in the afternoon to punch his ticket into the final against Coben. Klughart got off to a great start in the final and held off the Hall of Famer. He said was optimistic going into the week.

“I felt so confident going up there and I’ve felt confident for the last couple weeks,” he said. “I felt if I kept the ball in play and play the way I have been I would be tough to beat up there.”

The win was Klughart’s third Lobstick win. He also won the junior Lobstick event as a youngster.

Next on the OMT schedule for Klughart will potentially be the Reliance Gregg’s Central Amateur in Saskatoon. He couldn’t confirm he’d be in the field due to purchasing a home in Prince Albert but said if he doesn’t play that event he will use the Scotia Wealth Management Saskatoon Amateur Championship as a tune up for the 108th Saskatchewan Men’s Amateur and 32nd Saskatchewan Mid-Amateur Championships in July at the Saskatoon Golf and Country Club.

Klughart did qualify for the Canadian Mid-Am Championship last year but didn’t attend due to a promise with Anna Young and being her caddy at the CP Women’s Open. He said a trip to nationals this year is hopefully in the cards.

“I will definitely play the Canadian Mid-Am if I qualify and I don’t know, I would have to get the okay from the boss for the Canadian Amateur,” he chuckled.