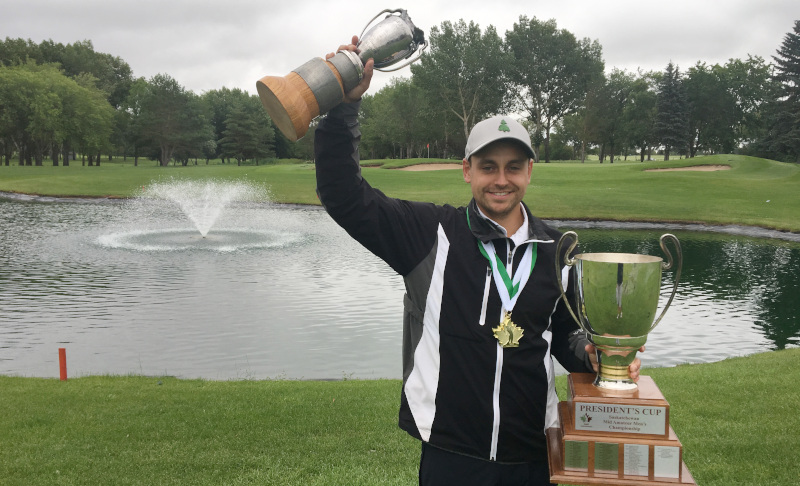 Golf Saskatchewan is changing the format of the provincial men's amateur this year.

It’s been a long time coming but Danny Klughart is finally a provincial amateur champion.

The Prince Albert product battled back from an opening round of two-over, 74 and defeated Jehremy Ryde in a weather-delayed playoff hole at the Saskatoon Golf and Country Club on Friday. Klughart was three strokes back going into Thursday’s final round of the 54-hole championship when he started to heat up. He posted the low round of the event going six-under, 66 in round three to force the playoff. After the pair had teed off in the playoff a plow wind blew through the course forcing a delay. Friday morning the playoff resumed with Klughart carding a par, Ryde bogeyed giving Klughart the title.

“I have came in second here at the Saskatchewan Amateur twice so I really didn’t want to finish second again,” Klughart said. “I knew Jehremy was playing well but I knew I had the advantage in the playoff being 60 yards ahead of him. I thought if I hit a good wedge shot in there I’d have a good putt at birdie. It feels really good.”

Klughart, a member at Cooke Municipal Golf Course has been one of the hottest players on the Order of Merit Tour (OMT) winning his last two starts. Despite an opening round of two over par, he felt the championships were in his sight.

“I have been hitting the ball really well, if I just got my putter going I’d have a good chance of shooting five or six under. I figured if I did that for two rounds I’d be awfully close,” he said.

Klughart wins both the amateur championship and the mid-amateur (25-plus) provincials and will represent Saskatchewan at both national championships. He said with the effort he’s put into his game the accomplishment is well worth it.

“I’ve put a lot of work into my game this year. I’ve played a lot and addressed my weaknesses that have held me back in the last few years” he said.

Despite a silver medal performance in both events and a trip to nationals, Ryde is basking in the result. He said after an injury kept him out of the Canadian nationals a year ago he’s excited for the opportunities.

“I am really excited to go back to nationals,” he said. “It was unfortunate I missed last year but I think my game is in a good spot. I’m really happy to make it back, that was one of my goals for the week,” he said.

Justin Wood defeated Roman Timmerman in a playoff for third in the amateur championship to claim the bronze medal. The pair was on the green when the weather disrupted play Thursday afternoon. Wood drained his birdie putt Friday morning; Timmerman never got a chance to shoot. He will attend nationals however with a fourth-place finish.

Shaun Dunphy of Saskatoon placed third in the mid-amateur event, he will represent the province in Toronto. St. Walburg’s Scott Thompson is the alternate.

The national teams are still being finalized, Golf Saskatchewan is sending nine amateurs to the Canadian Championship and 13 to the mid-amateur event.

The complete tournament results can be seen here.