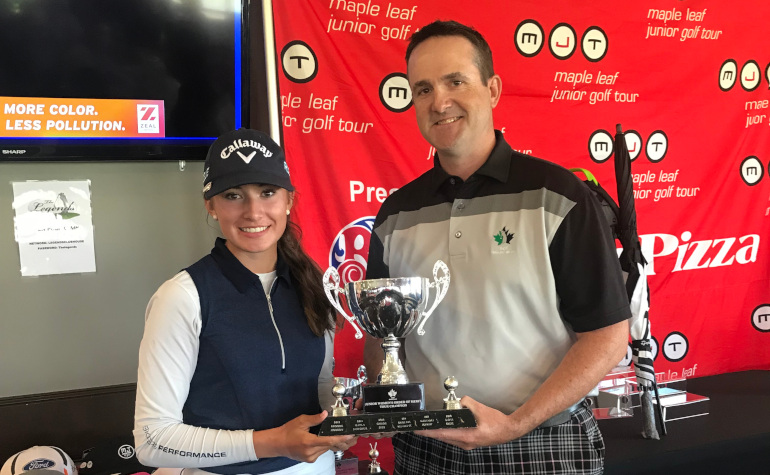 Autumn Neiszner is the under-19 girl's 2019 OMT champion.

Following the Maple Leaf Junior Tour (MJT) Order of Merit Championship this past weekend at the Legends Golf Club the five junior champions have been crowned.

The Golf Saskatchewan OMT format has five different age groups, an under-19 in both boys and girls, there is an under-15 division in both genders as well as an under-13 boy’s division.

In the under-19 girl’s division Regina’s Autumn Neiszner capped off a great season with the OMT victory. Her provincial championship win in Nipawin helped her outlast 2018 OMT champion Sarah Grieve. The Wascana Country Club member finished with 3,100 points in five qualifying events. Carey McLean rounded out the top-three with 1,650 points, Saskatoon’s Grieve collected 2,625 points over the season.

The under-13 girl’s champion is Yorkton’s Ella Kozak. The Deer Park Municipal Golf Course player played a tonne of golf this year participating in seven tournaments on the OMT. The 13-year-old picked up 1,380 points. Last year’s under-13 winner Brooklin Fry was the only other competitor, she amassed 787.50 points in just two qualifying events.

Estevan’s Jayden Dudas used the MJT event to leapfrog Saskatoon’s Josh Nagy for the under-19 boy’s championship. A first-place tie for Dudas in his age group in Warman gave the TS&M Woodlawn player 675 points allowing him to pass last year’s champion by just 50 points. Dudas won a pair of MJT events this season assisting in the OMT victory.

Kindersley’s Cort Tunall capped his strong season with a third-place finish with 1,764.58 points.

The under-13 boy’s group was also tightly contested but in the end it was another Estevan player winning the championship. Jayden Chernoff won the category with 1,030 points, 70 more than Dane Giesbrecht of Warman.

Golf Saskatchewan presented all the champions with their trophies at the two-day tournament in Warman on Aug. 25.

You can see all the results here.