Johnson; Timmerman put on a show in Oklahoma 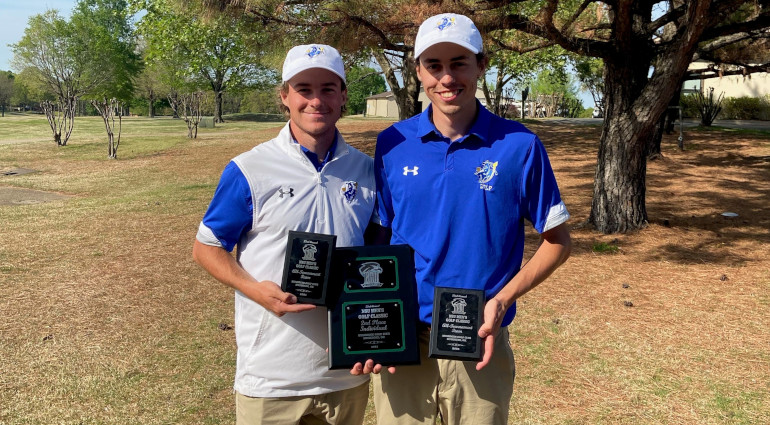 ROMAN TIMMERMAN & KADE JOHNSON BOTH FOUND THE PODIUM AT THEIR COLLEGE TOURNAMENT TUESDAY.

The leaderboard at the 22nd Annual NSU Golf Classic had two familiar faces near the top of the list on Tuesday.

In fact, when the 54-hole event in Muskogee, Oklahoma drew to a close Kade Johnson was atop the board tied for first place with Luke Palmowski at 6-under par. Johnson, from Yorkton and nearing the end of his collegiate career was shooting for his second win at the NCAA Div. II level, but the Sourthern Arkansas University (SAU) Mulerider lost on the second hole of a playoff to Palmowski of Rogers State University.

Johnson had the lead after day one when the tournament was postponed after 33 holes. He fell back to a tie for fourth at one point during the third round but battled back to force the playoff claiming a solid second place.

The long-time college teammates scores helped the Muleriders place fourth overall out of 20 universities in the competition.

Also competing in the tournament was Prince Albert’s TJ Baker. The college freshman at Arkansas-Monticello University finished in a tie for 109th at 28-over par. There were 116 players in the field. His team finished in 16th place.

Regina’s Alex Schmidt (above) was having a stellar two days on the course herself for the Lewis-Clark State Warriors.

The junior placed fourth overall with a 36-hole score of plus-15, 159 at the Bushnell Invite in Creswell, Oregon at the Emerald Valley Golf Club.

Next up for Schmidt and Lewis-Clark is the Cascade Conference Championships at the end of April.