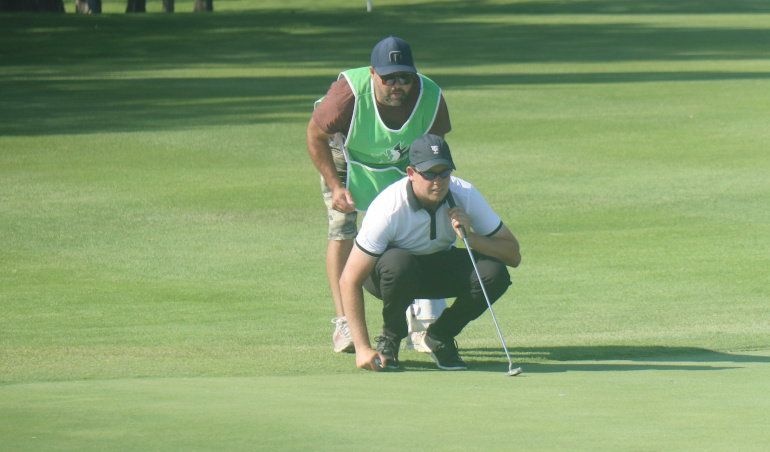 Eston's Jehremy Ryde is the new amateur and mid-amateur leader.

There’s a new leader on top of the Saskatchewan Amateur and Mid-Amateur championships at the Saskatoon Golf and Country Club.

Eston’s Jehremy Ryde shot a four-under, 68 to vault himself up three spots into first overall in both championships on Wednesday. Ryde, who plays out of the Riverside Country Club in the Bridge City sits one stroke ahead of both Shaun Dunphy and Sean Mills, both sit at five-under par going into Thursday’s championship round. Ryde said his 70 was solid on Tuesday but during the middle round of the event everything went right on route to a tie for the lowest 18 holes of the championship.

“I drove it a lot better today,” he told Golf Saskatchewan after the round. “I got myself in position to have some shorter clubs in, I hit a lot of greens. I was 15 or 16 greens in regulation today which really helped.”

Ryde wasn’t the only competitor making a charge on day two, St. Walburg’s Scott Thompson (left) was also four-under on Wednesday, he went from 17th to sixth place, four strokes back of Ryde. Prince Albert’s Danny Klughart also charged ahead during the second round. The Cooke Municipal Golf Course member moved up nine positions into eighth overall in the amateur. Mills had a tie for the lead after the first round with Humboldt’s Mike Herperger and Calgary’s Jared Hundza. Herperger grinded out a plus-one, 73, he’s in a tie for sixth with Thompson. Hundza was five-over par dropping him to a tie for 17th.

17-year-old Josh Nagy sits all alone in fourth at minus-four, Justin Wood is at minus-three to round out the top five. Ryde said he won’t change his mindset going into the final round.

“It’s pretty much the same plan for tomorrow. My caddy and I have a distinct game plan about how to play the course and hopefully I hit good shots and get the putts to go in tomorrow,” he said.

Not much changes on the mid-amateur leaderboard which is for players over 25 years old. Nagy and Wood are not in the mid-am field, that pushes Thompson and Herperger into a tie for fourth place. Klughart sits in sixth.

A total of nine national amateur spots are up for grabs and 12 Canadian Mid-Amateur Championship positions are open. With many of Saskatchewan’s top amateur’s in the hunt, Ryde said Thursday is bound to be a great round.

“I’m fortunate enough to play with a lot of these guys at Riverside and around the city and tournaments. It will be fun to play with Shaun (Dunphy) again tomorrow, he’s a great guy. We’re all really looking forward to it,” Ryde said.

The final round begins teeing off at 7 a.m.