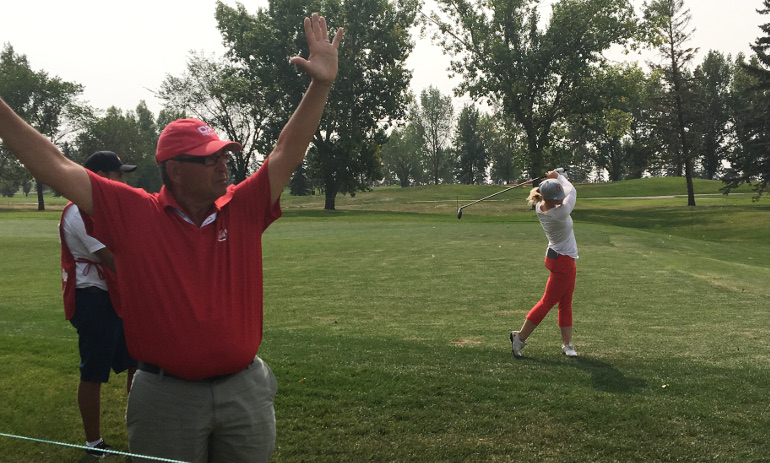 Saskatoon’s Anna Young will never forget her first 36-holes on the LPGA Tour.

The 24-year-old won’t make the cut at the CP Women’s Open in Regina on Friday but overall, she said the experience “was awesome.”

Young fired a 3-over, 75 to cap her first ever Tour event at plus-9. She said her second round went better than her first 18 holes on Thursday.

“I started off a little better. My putting has been solid the last couple days which I’m proud of because these are different conditions than what I normally play on the Symetra and Mini-Tour so I’m proud of myself for adapting to that,” she said.

For the second day in a row the back nine holes at the Wascana Country Club caused Young all kinds of trouble. She was 3-under par on the front nine holes over her two days and plus-12 on holes 10 to 18. Young said she was more familiar with the front leading up to the event.

“I was much more comfortable playing off the front nine because I was only allowed to play the front more often,” she explained. “I hit a lot more shots on the front this week leading up to the event and that showed.”

Despite missing the cut and not playing on Saturday and Sunday Young said taking part in the tournament fulfilled a life-long dream.

“It’s been an awesome experience talking to the media, it’s been a real cool experience and good preparation for the future. It’s been so much fun signing autographs, I love playing golf for me, but I also like to aspire younger kids,” she said.

Young will now fly to Siuox Falls, South Dakota on Monday and play in the next Symetra Tour event. Following that she will continue to play events on a “week to week” basis.