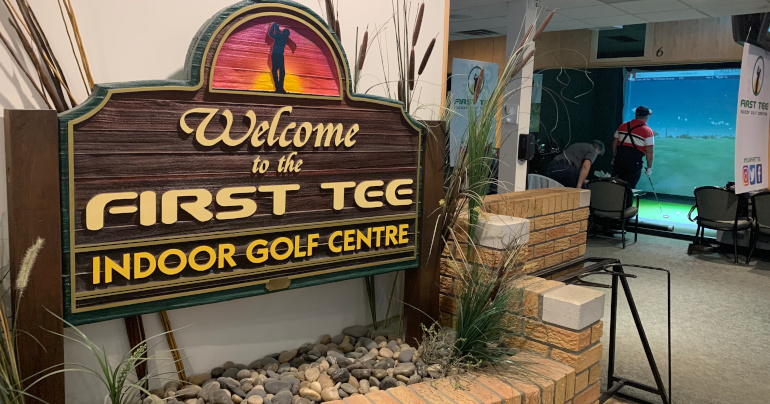 Now that winter is officially here in Saskatchewan the focus for golfers, both competitive and recreational is shifting to indoor facilities.

Luckily for residents in many areas of southern and central parts of the province your community or one nearby has a facility you can hit balls in. Some provide a simple space with a net and warmth, others like Garrett McMillan’s First Tee Indoor Golf Centre in Regina have top of the line equipment to give golfers a feel for the real thing. First Tee is western Canada’s largest indoor facility with 10 simulators that were upgraded last year. McMillan said the spill over from a tremendous golf season is evident.

“From October to November (2019) we weren’t overly busy and we figured it’s because people had played so much in the summer they didn’t want to come inside and play or they were going to Phoenix or whatever, there was some sort of golf hangover. Our first two months are genuinely slow but since we put in this new technology we’ve got more and more people practicing and playing. I’ve got 15 to 20 people in here right now at 11 a.m. on a Friday trying to improve their golf swing,” McMillan said.

First Tee’s Swing Golf Simulators are the same brand used by PGA players Jordan Speith and Tiger Woods. McMillan is also a PGA of Canada professional. He said the data feedback off his simulators provides top of the line responses to elevate any players skill set.

Being a coach, McMillan strived to provide the best technology to allow himself the data to share with his clients. From a teaching standpoint he said no matter how you can play in the winter; the offseason is the best time to make changes to your game.

“The winter time is the perfect time to making changes especially if you want to commit to making big pattern changes,” he said. “There’s really no consequence, if you shoot a high number inside it’s easier on the ego than inside. You can really develop a new pattern over the winter and not be overly concerned about the consequence side of it. If you develop your pattern properly over the winter by the time you get to the course you hopefully have new shots in the bag you can roll with.”

First Tee has weekly men’s and ladies’ leagues and is open seven days a week.

For the first time in 13 years, Cam Koch is back owning an indoor golf facility in Yorkton. Cymbob’s was owned by another person in Koch’s building but upon retiring he took over the business again revamping it as Bunkers Indoor Golf for the first time since 1998. Koch said he’s expanded beyond golf to provide several different indoor activities.

“I decided to move the business to a year-round business from a six-month business when my bingo hall client wanted to reduce their size. In March when we had the COVID shutdown that allowed significant time to do renovations and increase my footprint. Now I offer three golf simulators, two axe throwing booths, a baseball simulator, pool tables and a soccer sized pool game that kids really enjoy,” Koch explained.

Bunkers’ simulators have almost 60 golf courses loaded onto them and every major league baseball park is in play on the ball screen. Koch said business has been steady since the weather turned in October.

“We mostly had customers for the axe throwing, golf was second and the pool stuff is third. It was a real nice start to the season. Usually starting mid-October it’s a lot of opening at 10 a.m. and staring at the walls until 8 p.m. then closing. Not this year, it’s been busy from the get-go,” Koch beamed.

He isn’t running any league play, but he said the groups of golfers have made weekly nights their own and taken on the inside games among themselves.

Jordan Orr felt there was an indoor golf facility need in Saskatoon so opened one up prior to the COVID-19 pandemic. He was busy at YXE Golf Lounge until the lockdown in March. Orr said even with the weather starting to warm up at that point he had ideas of staying open to provide more entertainment in the Bridge City.

“It was a good year last year, every week we broke the previous week’s record until we had to close down,” he said. “I had a couple plans like video games and other ideas because essentially the screens are like theatres. I hung out there a lot even after the lockdown watching Netflix and stuff. My kids loved hanging out there and playing video games, so I had some ideas that never got off the ground.”

“The last week before we closed it was like a party all week in there,” Orr continued. “I thought things were going to slow down in March, but we were booked solid for the first two weeks before we were forced to close.”

YXE Golf Lounge has five golf simulators with 10 feet by 14 feet screens and TruGolf hardware. Orr hasn’t planned for any events or weekly leagues this winter due to the uncertainty the pandemic continues to control. He said the business is currently following provincial health guidelines regarding capacity, a limited food menu and cleaning. Orr said if the province can avoid another shut down he expects to build offer a record-breaking summer of rounds across the nation.

“People are still enjoying it,” he said. “It’s going to be a while before we can get back to the real fun times, but I mean it’s still something for people to do in the winter. Keep swinging, get out of the house, that’s pretty much why I started it, to bring more entertainment. Hopefully we will be able to stay open for the winter.”