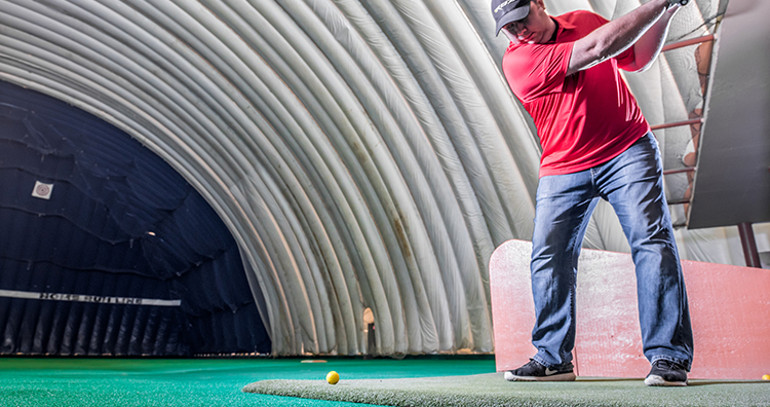 The Golf Dome in Saskatoon will open after the long weekend.

Routinely golf courses in Saskatchewan see traffic until the middle or end of October, this year Mother Nature has had other plans dumping snow on parts of the province forcing clubs to shut down prior to the Thanksgiving long weekend. The turn in weather has also forced indoor golf centres into earlier opening dates.

The Ramada Golf Dome in Saskatoon will open after the long weekend. The facility was hoping to be ready to take customers but renovations at “bubble” won’t allow that to occur. The building features 35 hitting stalls with state-of-art tee mats. There is 80 yards from tee to the back wall. Operations manager Graham Reddekopp said their facility allows players a real feel over Saskatchewan’s long winters.

“The players work on a lot of their irons, they come back and say I had the best summer I’ve ever had because I got to swing here,” he said. “You get to take full swings with your irons especially, still touching the clubs and not losing that rhythm is so important.”

Aside from the realistic approach the Golf Dome offers, they are linked with the Ramada Hotel allowing visitors to the City of Bridges to work on their game. Reddekopp said return clients do spent time in their facility when they come back.

Saskatoon is home to several simulators as well. 1st Tee in Regina is Western Canada’s largest indoor golf facility with 10 full swing simulators. Owner Garrett McMillan said facilities such as 1st Tee are important for the sport not only in Saskatchewan, but nationwide due to the long winters.

“It’s kind of the biggest knock on golf in Canada for anybody that wants to elevate their game,” he said. “You make strides with whatever you work on through out the summer and suddenly September comes you play a few more rounds of golf and then you have to sit and think about it. The hands don’t quite remember after six months what was worked on, so you take a step forward but almost take a step back.”

1st Tee has men’s and women’s leagues that are very popular. McMillan, who is a golf coach at the Royal Regina Golf Club is launching a junior league this year. The league will run for 10 weeks beginning on Oct. 14. McMillan said starting the league will help develop young golfers on the course but in life going forward.

“They will interact with friends that are maybe, summer friends. We all have those friend groups that based on whatever you do. This will help kids keep in touch and maybe grow a little more competition with them as well,” he said.

Simulators and winter facilities are speckled across the province and not just located in the large centres. The town of Moosomin in the Southeast corner of the province spent top dollar on several multi-sport simulators including four with swing track technology. Director of Parks and Recreation, Mike Schwean said the town wanted to expand on their leisure activities when deciding to purchase the simulators and expand on their bowling alley.

“Golf is big out this way, we thought we’d get some business from that. There are four simulators with swing track on them. Simulators vary in quality, we went out and bought the best ones money can buy and they’ve attracted people as we’d hoped,” Schwean said.

Moosomin has leagues for both men and women as well, Schwean said they fill very quickly, many nights they have two tee times to accommodate the demand. He said the holiday party season is very popular as well and their weekends are already booked for the next couple months. Schwean said the simulators are fun but helpful in developing your game too.

“I’m not going to lie, I’m an average golfer, you can fix things in a hurry because you can see what’s going on with the face of your club. Everything is crystal clear, it shows what kind of spin you are putting on the ball. It’s pretty obvious what is going on with your swing. It’s pretty cool.”

Most indoor golf facilities have websites and social media accounts and can be found through your search engine if you are seeking venues to help enhance your game or fulfill your golf fix over the winter season.