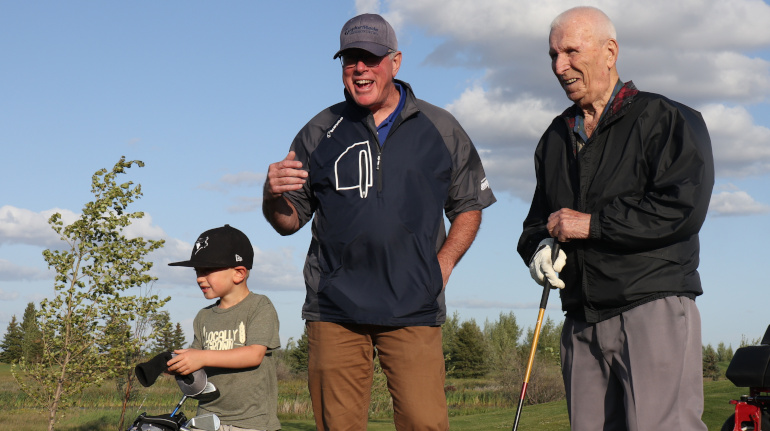 From junior golfers to seniors the sport is a great way to improve and maintain mental health.

Six golf courses in Saskatchewan are celebrating milestones this year, the Humboldt Golf Club’s 75th anniversary is one of the lengthiest of the bunch.

Wednesday night a crowd of members and onlookers gathered at the course for the celebration emceed by long-time member and current board executive Dave Hill. A member since 1986, Hill said the event was special to everyone currently or formerly involved with the club.

“We are really excited to celebrate 75 years,” Hill said after the event. “The mayor mentioned in his greetings that it wasn’t too long ago we had an emergency meeting about our finances and future of the course. Things have really turned around, a lot more play at the golf course, a lot more use of the facility, it’s been a really great year.”

During the program board president Kirk Plemel presented a history of the facility. The course opened at its current site in 1944 as a nine-hole club with sand greens. The greens were changed to grass in 1969. With the community growing and nine holes becoming too congested the community invested a million dollars and expanded to 18 holes. During the original days a round would cost $0.25 and an annual membership was $7.50. Hill said during the summer months the course is a beehive of activity in the east-central Saskatchewan city.

“It brings a lot of traffic into our town,” he said. “A lot of people come for tournaments, not just for tournaments although we get lots for those. We get all kinds of visitors from all over. We had some people from B.C. just playing their way through and going to all sorts of towns, it’s great to see those people. We see a lot of the community here, some of them golf twice a year, some are here everyday, it’s great to meet them all.”

During the celebration two ceremonial tee offs took place on the first hole. One of the oldest members, Mike Sowtis, 89, hit as did the youngest member, three-year-old Jack Unrau. Hill has two sons who have been life-long members as is his wife Jackie who has volunteered countless hours working on the board and helping with the bookkeeping. Hill said those memories flashed back when Unrau took his swing.

“Golf is a lifetime sport, when Jack was teeing off I was thinking about the first time my sons teed off. Our whole family are golfers here, we’re still enjoying it and hope to be enjoying it when we’re Mike’s age,” he said.

Five-time Saskatchewan women’s amateur champion Anna Young was also in Humboldt Wednesday. She hosted a free putting and chipping clinic for junior golfers with the assistance from 2018 mid-amateur champion and Humboldt resident Mike Herperger. Young won her fifth amateur title at the Humboldt course. Golf Saskatchewan will have more regarding Young’s clinic Friday.

The other courses celebrating milestones in 2019 are Swift Current’s Elmwood and the Weyburn Golf Club, both are 100 years old this year. Shaunavon’s course turned 50 this summer and Mainprize and Lashburn are each 25.