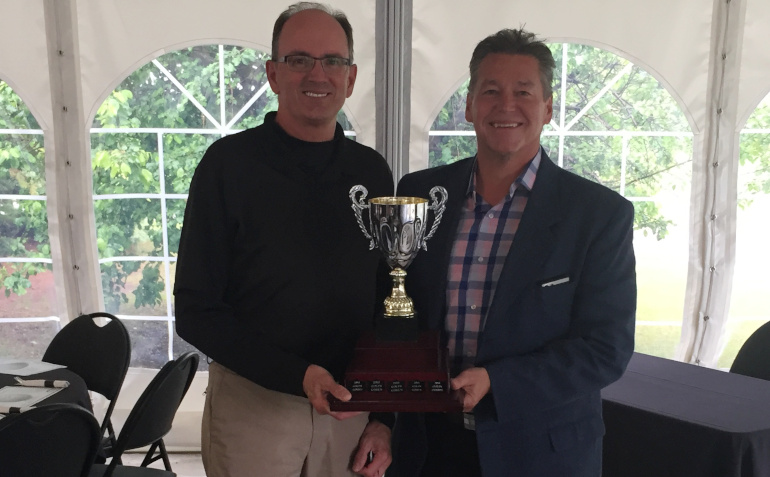 Humble held off six-time, and reigning champion Colin Coben by a stroke over three days at the Moon Lake Golf and Country Club just outside Saskatoon. Humble, 57, fired a total of 225 (75, 78, 72) to finish at nine-over par. The win earns the Saskatoon Golf and Country Club member 750 points on the Senior Men’s Order of Merit Tour (OMT). He managed to put together a line of birdies to win the championship for the first time.

“I went on a birdie string, I got five birdies in a row,” Humble said to the Star Phoenix’s Darren Zary after the win on June 20. “That really got me back into it. The golf gods rained down on me today.”

Rain was the key word, the field battled heavy winds and precipitation during the final round. Humble said the conditions were some of the worst he’s played through.

“The last six holes were really wet, it really started coming down a lot harder and the wind came up so it got colder. By the wettest I’ve played in, not as windy but as wet,” he said.

Hallberg leads the OMT standings again early on this year, Coben is in second place. Humble jumps into the mix with the win sitting in fourth place behind Lional Fauchox, he placed seventh in the Auto Clearing event.

Next up for the seniors is the Publinx in Regina this Saturday and Sunday.

Down in Weyburn on the Men’s OMT, Estevan’s Anthony Melle was a two-shot winner over hometowner Carter Hilkewich at the Weyburn Crocus Men’s Open on June 16.

Melle carded one-under 143 (73, 70) over two rounds to win the championship and earn 500 OMT points. Hilkewich’s 145 earned him 375 points. Ryan McNall of Regina continued his strong start to the year with a third-place finish. McNall sits in second behind Lobstick champion Danny Klughart on the Men’s OMT leaderboard.

Carson Harcourt of Kipling was four strokes back in fourth-place, Weyburn products Marshall Bakken and Travis Mryglod tied for fifth.

The Publinx event at Tor Hill this weekend is the next OMT event for the men as well.