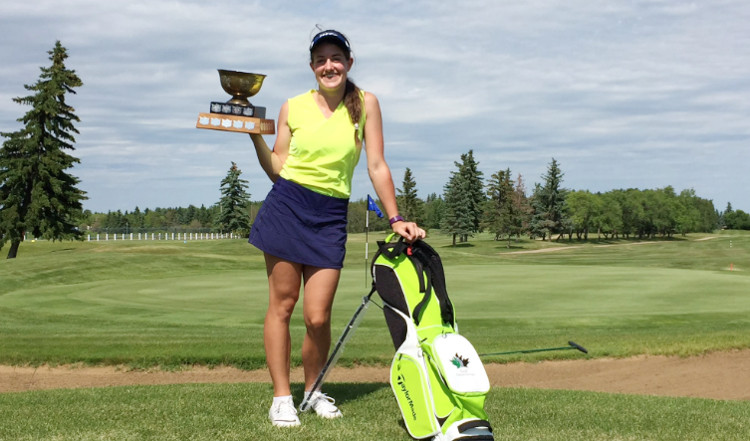 Regina’s Brooke Hill will be considered one of the favourites heading into this weekend’s Saskatchewan Women’s Amateur Championship, the Wascana Country Club member is the defending champion.

A little bit of a self proclaimed late bloomer, Hill spent plenty of time at the course with her father who was a teaching professional when she was young. She didn’t know up until high school if golf was something she would pursue. Eventually the game landed her at the University of Illinois Springfield, even then she wasn’t sure if competitive golf was in her future.

“It took a while for me to feel comfortable in a competitive setting,” Hill admitted. “Even when I went away to college I wasn’t quite convinced, but eventually you get into a groove and I realized I could compete with the best.”

In her junior year of college Hill played a tournament in 1 degree Celsius with 60 kilometre per hour wind and rain. In a field of over 100, one golfer finished sub-80 while Hill shot an 80 with nothing over a bogey dotting her scorecard. She said that was when she realized she could handle just about anything on the course. Winning last year’s Amateur Championship was a “life-long” goal of Hill’s and she said it assisted in her final year of university golf experience wise. She said going into the 100th anniversary event this year will have a different touch.

“I just graduated in Illinois and am now done with collegiate golf. I will always try to come back to Saskatchewan and play competitive golf in the summer but, I feel like my focus has shifted. That being said, I can rely on my competitive experience and can’t wait to get out there and compete,” she said.

The 54-hole event begins Friday at Harbor Golf Club and Resort. The historic tournament will finish on Canada Day. Hill said to be involved in the centennial version of the championship will have a defined feel.

“The 100th anniversary will be very special and I’m greatly looking forward to the little things Golf Saskatchewan may do to make it feel that way. It’s a representation of how far women’s golf has come in this province, and hopefully we can continue to grow our great championship for many years to come,” she said.