Herlick picks up win south of the border 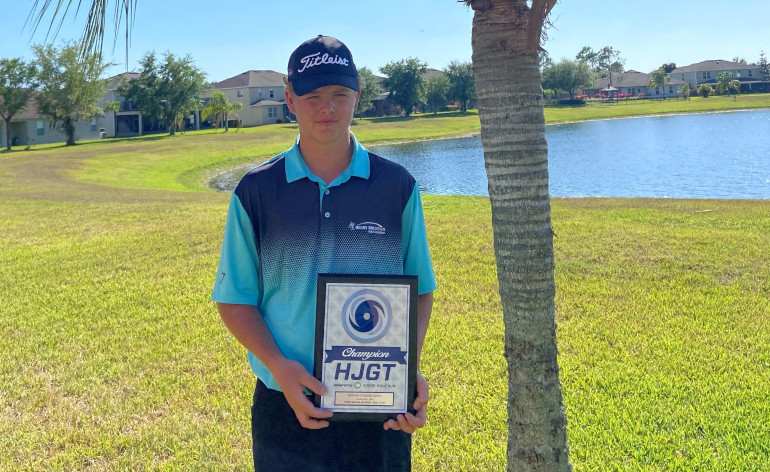 Weyburn's Darien Herlick is a winner on the HJGT in Florida.

Weyburn’s Darien Herlick is picking up golf championships in Florida while his home province shovels away hopefully one last blast of winter.

Herlick, 15, is currently in the sunshine state attending the Henry Brunton Golf Academy. While attending the academy the students live in a house five minutes from the training facility, practice and enter events while keeping up with their schoolwork online. One of the tournaments Herlick took part in this past weekend was the Hurricane Junior Golf Tour (HJGT) Orange County National Spring Junior Open. He was able to shoot 1-over par on day one of the tournament and with the second round washed out by weather Herlick was crowned the boys 14-15 age group champion.

“I hit a lot of fairways and greens,” he told Golf Saskatchewan. “Not many putts fell but I took two putts all day. I think that was key as to how the conditions were.”

The HJGT is the “United States version of the Maple Leaf Junior Tour (MJT) here in Canada” with events across the nation. Herlick has his fair share of wins in his home country and province but winning in Florida provided a big confidence boost.

“There’s kids from all over and definitely way bigger fields than usual. If you look at the leaderboard it was pretty stiff competition. Everyone was within two or three strokes. I did not even know about the leaderboard until I came in. I for sure thought the leader would be a little under par. Even though I did not play my absolute best I was still leading and that proved to me I have a good chance at winning,” Herlick said.

The 14-15 age group had 27 players in the field. Herlick said the set up was about 6,700 yards and his age group played the same distance as the 16-18 competitors which he enjoyed. He said hearing of the second-round cancellation was disappointing, but he is still happy with the result.

“It would have been a little more satisfying to get the second day in, but a win is a win I guess,” he said.

Herlick will spend the rest of April at the facility before returning to Weyburn. Before he heads home he will compete in two more HJGT events. He said the academy has been a wonderful experience and he hopes it builds towards a strong summer in Saskatchewan.

“I would like to keep my scores in the low 70’s area and place well. Not only in the MJT but the Men’s Amateur Championship I am thinking about playing in and junior provincials too. I feel like my game has gotten really good down here and I think I can compete back home with the kids older than me,” he added.

Symone Ripley, another Saskatoon golfer finished 30th in the girls 14-18 age bracket with a score of 17-over 89.