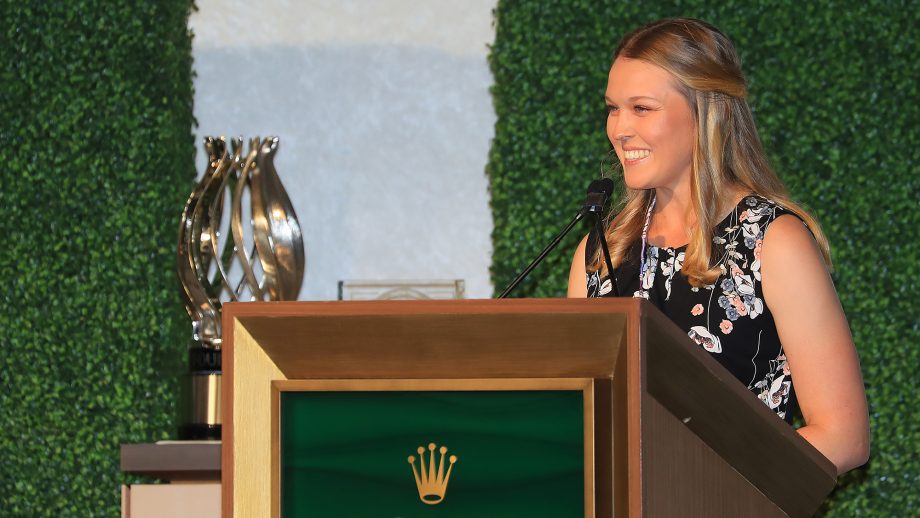 In a comfortable floral jumpsuit and with her parents in the audience, Brooke Henderson added another award to her ever-growing trophy case.

The 22-year-old won the 2019 Founders Award at the Rolex LPGA Awards ceremony Thursday night in Naples, Fla. during the week of the CME Group Tour Championship.

The Founders Award is newly named for 2019. Formerly called the William & Mousie Powell Award, it was renamed for this year to celebrate the 13 founders of the LPGA.

Henderson told golfcanada.ca that the win was extra special since the winner of the award comes from a vote by fellow golfers on the LPGA Tour. It’s annually given to, in the opinion of her peers, someone “whose behaviour and deeds best exemplifies the spirit, ideals, and values of the LPGA.”

The nine-time LPGA Tour winner said she first found out at an LPGA Tour Players’ Meeting earlier in the year that she was one of the nominees, and said to know people were voting for her was ‘pretty crazy.’

“It means a lot,” Henderson said. “I spend so much time with these girls that it’s really a great honour to be given the Founders Award.

“To be considered in the same sentence as (the founders)… their passion and perseverance and what they did this Tour was amazing. This is really cool for me.”

Henderson has made a habit of capturing awards-by-votes in 2019.

Earlier in the year she became the first Canadian golfer to win an ESPY award (she won for ‘Best Female Golfer’) and in October she won the Canada’s Sports Hall of Fame People’s Choice Award – a new award designed to recognize ‘future Hall of Famers who are a champion of their sport and a champion for their community.’

“This year has been really crazy for the awards. I didn’t expect any of them,” Henderson said, flashing her recognizable smile. “To get them is just amazing. I’m honoured, humbled… and it’s just an amazing feeling.”

A champion both on and off the #golf course ???⁣ ⁣ @BrookeHendersonGolf was named the 2019 recipient of the Founders Award, given to the player “whose behaviour and deeds best exemplifies the spirit, ideals and values of the #LPGA” #DriveOn

Henderson, who sat at a table with Lexi Thompson and executives from Rolex at the awards dinner, has won twice in 2019. Her victory at the Meijer LPGA Classic was the ninth in her young career. Win no. 9 gave her more than any other Canadian in the history of the LPGA or PGA Tour.

“This award that Brooke got is maybe one of the most special ones because it’s voted on by her peers and we’re so impressed and thrilled for Brooke to be recognized. We know how special she is,” said Golf Canada CEO Laurence Applebaum. “For all of her peers on the LPGA Tour to give her this award is phenomenal. It’s great for herself and her family and for all of Canadian golf.”

The native of Smiths Falls, Ont. has become a driving force for young golfers across the country – but even this week in Florida there are plenty of girls dressing with a visor and ponytail like Henderson walking outside the ropes – and she said being able to play in front of Canadians no matter where she goes makes her even more grateful for the support.

Henderson said she’s recognized her role and is happy to have an opportunity to be an inspiration both on the golf course with her record-breaking play, and off the course as well, as someone people can look up to.

2019 CP Women’s Open winner Jin Young Ko was the night’s big winner, as she took home the Rolex Annika Major Award, and Rolex Player of the Year. With just three rounds left in the LPGA Tour season, she has nearly wrapped up the Vare Trophy (for lowest scoring average) as well.

Henderson sits T5 after the first round of the CME Group Tour Championship.