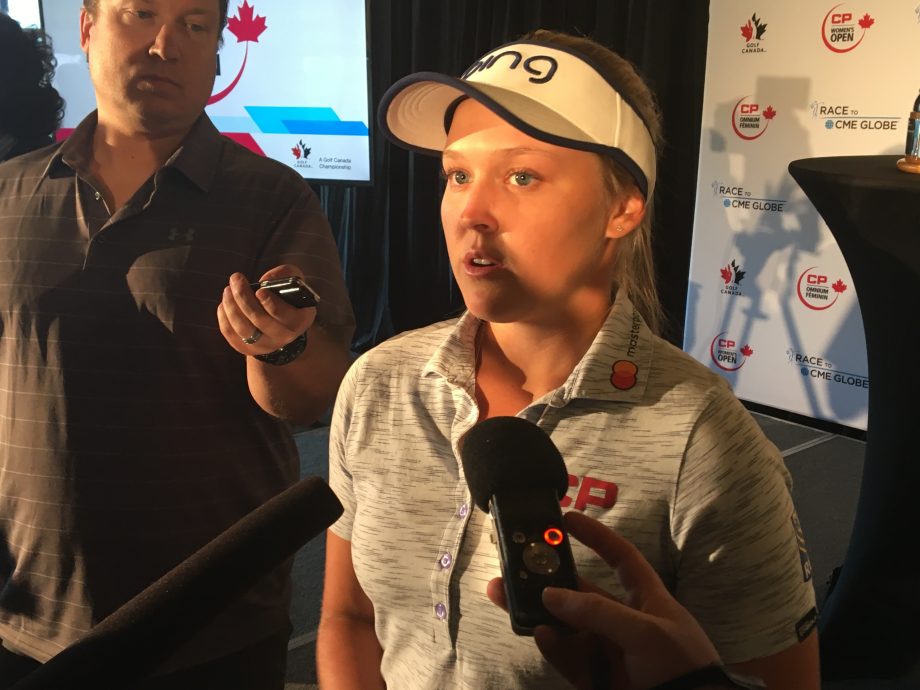 Brooke Henderson will be among the field at the 2018 CP Women's Open in Regina.

When the LPGA descents upon Regina’s Wascana Country Club (WCC) later this summer, 92 of the top 100 players on tour will be in the field including Canada’s Brooke Henderson.

The 20 year-old, six-time tour winner was in Regina Monday, along with Canadian Golf Hall of Fame member Lorrie Kane to help launch the unofficial countdown to the Aug. 20 – 26 event. Henderson said she’s excited to be back on home soil and looks forward to the CP Women’s Open every year.

“It’s amazing,” she said. “To play in your national open, to be in front of your hometown crowd, everything about it is so special and meaningful. I’m a proud Canadian, to have people from all corners of the world come play here, it’s cool to show the ladies what our country is all about.”

Among the players chasing the $2.25 million USD purse is nine of the current top-10 money leaders and the last 10 CP Women’s Open champions. Henderson will compete in her eighth Canadian championship. She said the commitment from her competitors will make the event a must-see.

The Wascana hosted the Canadian Men’s Mid-Amateur last year with great success. Chief Executive Officer Greg Dukart said the host committee has been preparing for the LPGA event for a couple years. He said the magnitude of the tournament is exciting for the club and province.

“A lot of people don’t know how big this is. The LPGA is expecting over 500 million households to tune in on the Golf Channel, that’s potentially over a billion people. To see tiny Regina, tiny Saskatchewan, let alone the WCC, that’s remarkable,” Dukart said.

Ticket sales have surpassed last year’s tournament in Ottawa, Dukart predicted between 50,000 and 70,000 people to attend. The LPGA is offering free tickets to anyone 17 and under. He said despite the work going into the course for the event the lasting legacy is hopefully a new wave of golfers.

“We hope to grow the next generation of Saskatchewan golfers. We hope a lot of young people come out with their parents and picking up the sport, that’s what we want to see,” he said.

The CP Have a Heart campaign will continue to benefit an outside community partner. This year the Jim Pattison Children’s Hospital Foundation will receive a financial contribution. Golf Canada executive director Laurence Applebaum (pictured below) said the partnerships making CP Women’s Open event a success are key each year. He said the tournament travels coast to coast giving fans across Canada the chance to witness the best the LPGA has to offer.

“We’ve gotten into a rhythm of West and East, being in Ottawa last year was a smashing success. Early indication has us exceeding those numbers in Saskatchewan at the Wascana. Who knows, we may come back to Saskatchewan, so far it’s been wonderful,” Applebaum said.

Volunteers are still needed for the week, information on positions and tickets can be found here.