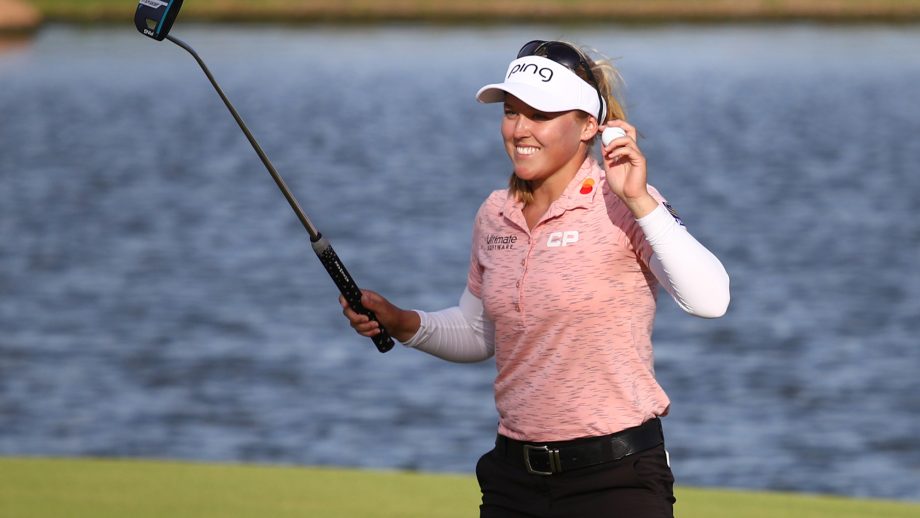 KAPOLEI, Hawaii – Brooke Henderson didn’t join the LPGA Tour thinking she would end up amongst the best Canadian golfers of all-time. At least not so soon, anyway.

Henderson tied the Canadian record for most career victories on the LPGA or PGA Tour on Saturday when the 21-year-old captured her eighth career title by shooting a 2-under 70 to win the Lotte Championship for the second year in a row.

Sandra Post had eight career victories on the LPGA Tour between 1968 and 1981, while Mike Weir and George Knudson equalled that on the PGA Tour.

“When I was younger it was just a goal to be on the LPGA Tour, to win my first event,” Henderson said.

“And when that happened and I won my first major the year after, things kind of just started to fall into place. I knew the record was eight. Just kept creeping toward it the last three years, which was really exciting.”

Henderson, from Smiths Falls, Ont., won last year’s event in Hawaii for her sixth Tour victory and followed that up in August 2018 as the first Canadian in 45 years to win the CP Women’s Open.

“I think starting last year I sort of saw that it was within my reach if I had two good seasons. Last year put me into great position, and coming back this year it’s been on the back of my mind every week that I tee it up. I’m just really happy that I have finally done it.

“Looking forward to overtaking it now.”

She finished 16 under on Saturday at Ko Olina Golf Club to beat South Korea’s Eun-Hee Ji by four strokes.

All the highlights from Brooke’s repeat performance in Hawaii ???? pic.twitter.com/XDRFo8KBht

Nelly Korda, tied with Henderson for the third-round lead, finished with a quadruple-bogey 8 for a 77 that left her seven strokes back at 9 under. She hit into the water twice on 18, then threw her ball in after finishing. The 20-year-old American also had a double bogey on the par-4 seventh.

“Pretty bad,” Korda said. “I mean, it was a tough day, but I ended really poorly and I’m pretty disappointed in that. … It was an unfortunate final round, but there is nothing I can do about it anymore.”

Henderson bogeyed her first hole, but that was the only blemish in the final round as she followed that up with three birdies and 14 pars.

She looked to be in some trouble on the par-4 16th, but saved par when she hit a put from off the green.

“It’s really amazing to even be mentioned in the same sentence as Mike Weir, George, and Sandra,” Henderson said. “This week was really special. I always love coming to Hawaii. Last year was such an incredible week for me, to be able to hoist that trophy for the first time. Coming back I knew I knew the golf course really well.”

Fellow Canadian and Olympic teammate Alena Sharp watched Henderson play out the round and joined her in celebration.

“Congrats my friend ?BrookeHenderson! Unbelievable title defense and tying Sandra Post’s record for most wins by a Canadian on the ?LPGA tour. So freaking proud of you!,” tweeted Sharp (72), who finished 2 under for 40th place.

Henderson, ranked No. 12 in the world, has one major among her tournament victories, winning the 2016 KPMG Women’s PGA Championship after beating Lydia Ko in a playoff when she was only 18.