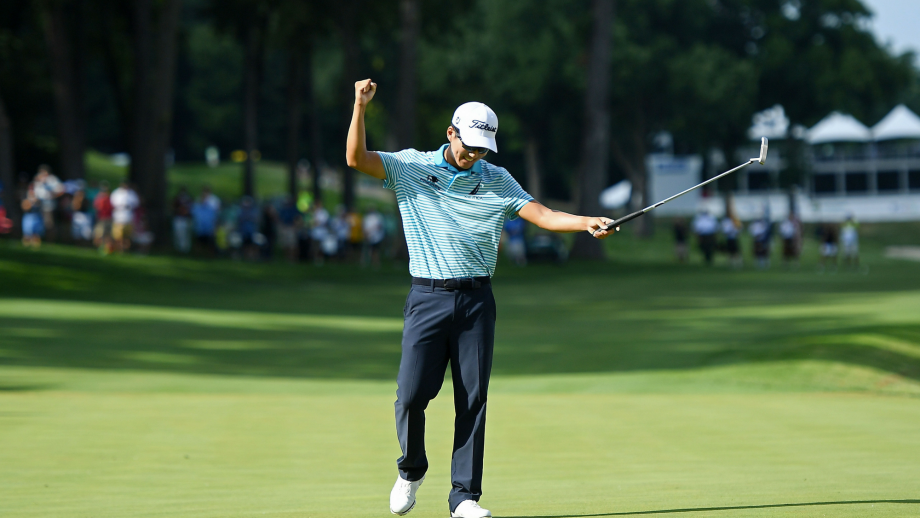 SILVIS, Ill. — David Hearn and Mackenzie Hughes were the top Canadians, finishing T16 at the John Deere Classic on Sunday.

Brampton’s Hearn was one to watch this weekend. The 39-year-old recorded third place and second place performances during the first two rounds but finished tied for sixteenth alongside Hughes after a fourth round 1 under.

Hughes moved up 18 spots to end tied with Hearn and five other players after firing 6 under to finish at 14-under-par 270.

Kim’s prizes? A little over a million bucks, a two-year exemption on tour and a trip to the British Open.

Kim shot a final-round 66 on Sunday to win the John Deere Classic by a record-setting eight strokes. Kim, who turned 25 on Saturday, finished at 27-under 257 to break Steve Stricker’s tournament record from 2010 by one shot.

Kim also qualified for next week’s Open at Carnoustie _ an unexpected bonus for a player who had missed five of his last six cuts before his breakthrough in the Quad Cities.

“To be able to finish out in style like this, it means a lot,” said Kim, who nearly quadrupled his season earnings with a winner’s share of $1.044 million. “To be sitting here with a trophy, I’m at a loss for words.”

Bronson Burgoon, Francesco Molinari, Joel Dahmen and Sam Ryder all finished at 19 under.

Kim took all the drama out of the final round with birdies on his first three holes and secured the largest margin of victory during the tournament’s stay at the course, which began in 2000. J.P. Hayes (2002) and Vijay Singh (2003) won the event by four strokes.

Kim, who had previously had just one top-10 finish in 84 career starts _ a third at the Safeway Open two years ago _ entered play with a five-shot lead. It was the biggest edge for a third-round leader at the John Deere Classic since Stricker’s six-stroke advantage eight years ago.

Kim, a former star at Cal who had struggled to find his footing as a pro, made it obvious from his first swing that he wasn’t about to let anyone catch him.

Kim knocked in a 13-foot birdie putt on the opening hole, and then holed two more from 15 and 24 feet to give him seven straight birdies dating back to the end of Saturday’s round _ and a seven-shot lead.

The field might have felt a glimmer of hope when Kim dumped his tee shot into the greenside bunker on the par-3 seventh hole.

But Kim got his bunker shot to within 7 feet and made the downhill par putt, and he walked to the next tee with an eight-shot edge.

“Even the last couple of weeks, I felt like my game was getting there,” Kim said. “I just felt like I needed just a couple of good starts to the rounds.”

Kim surpassed Stricker’s mark with a 21-foot putt on No. 16. The understated Kim finally let loose, holding his hand to his ear in a nod to a cheering gallery.

Kim’s day ended on No. 18 in emotional fashion when he saw his brother, father and mother _ all of whom had made a surprise trip in hopes of seeing him get his first win _ on a video screen.

“I teared up a little bit on the green,” Kim said. “To see my parents here … it made me even more nervous.”