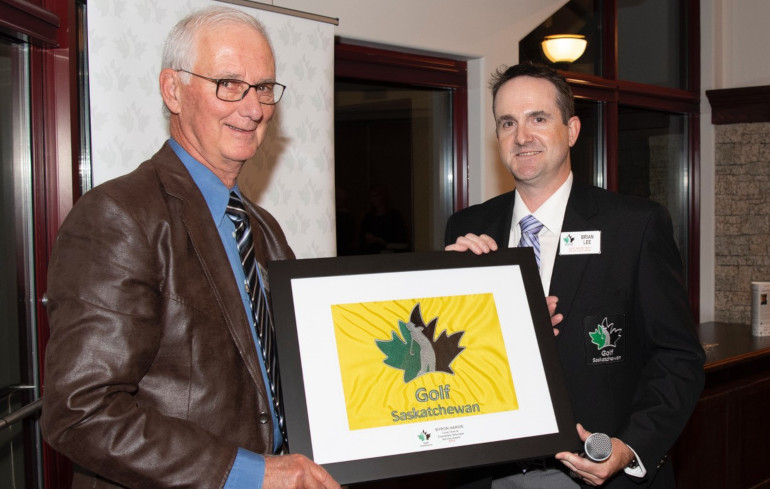 Golf Saskatchewan has awarded their Volunteer of the Year award for 2019 to Byron Harvie.

Harvie got his start with the organization about 15 years ago after some persuasion from then Executive Director Daniel Rauckman. Harvie was the chair of the both the Canadian Junior Boy’s Championship and the Canadian Mid-Amateur Championship at the Riverside Country Club which was enticing to Golf Saskatchewan.

Harvie then wrote his level 3 Rules test followed by passing the level 4 test, at the time he was the only person to acquire the accreditation. He then got into course rating, again at the coaxing of Rauckman. He then served on the board of directors for several years including two and a half years as president. Today he’s still a referee and course rater. Harvie said it’s the people you meet that keep bringing him back every year.

“I’ve watched some of the junior golfers who were let’s say 11 or 12 years old when they first started to play in juniors and now they are playing in the men’s amateur or the women’s amateur, that’s always been really special. They are all fine young people, they will come up now and talk to me, give me a hug or whatever. That makes it really good when you are around,” Harvie said.

Despite his long history of service to Golf Saskatchewan and Golf Canada Harvie didn’t get involved in the sport himself until later in life. He was active in sports playing baseball, hockey, and curling but when his son wanted to take up the game, he followed.

“When our son decided he would like to golf, he was 12,” Harvie explained. “We got him enrolled at Greenbryre with Pete Semko. I’ve known Pete a long time, but I have known his wife Cheryl even longer because we went to school together and lived around the corner. I said to Pete, if he’s going to be out here what about me? They let me join their club and I got started there. Next thing I knew after a couple years I was the club captain for a couple years before moving over to Riverside. That’s where it started.”

On Saturday, Sept. 21 the Golf Saskatchewan Hall of Fame inducted their class of 2019. Harvie and his wife, Lori, who works annually on the Hall committee were seated near the front when current Golf Saskatchewan Executive Director Brian Lee presented Harvie with the volunteer honour.

“As soon he mentioned the first couple things I knew exactly what it was because I have presented those when I was president to some people, I knew what was coming, I had to laugh,” Harvie said. “I kind of had it in the back of my mind because Brian kept pestering me to go down to the volunteer appreciation day. I was not overly surprised but I’m very proud to be recognized. It’s a feather in one’s cap.”

Harvie worked at a consulting firm for a career, he spent time in Montreal and Calgary before his work brought him to Saskatoon where he currently resides. Him and Lori now spend five months a year in California and golf more rounds there than they do at the Riverside where they are still members. Harvie said giving back to the game is easier when you have assistance.

“You can’t do this without the support of your wife,” he beamed of Lori. “My computer skills are not good, so she does all the computer work I need to do. With the course rating I have to be a lot better than I am.”

Harvie also has some advice for anyone thinking about volunteering with Golf Saskatchewan or any organization.

“I think the one thing is, especially if you are getting a little older, if you have to do a little study it keeps your mind sharp. Secondly, it gives you something to do and interact with other people. Things that are nice and fun and you need to do in the aging process.”

Harvie also serves as the rules chair of his men’s club in California.

“You simply can’t get away from it,” he laughed.

You can hear more from Harvie below as he spoke with Golf Saskatchewan’s Clark Stork.