Hard work paying off for Ripley 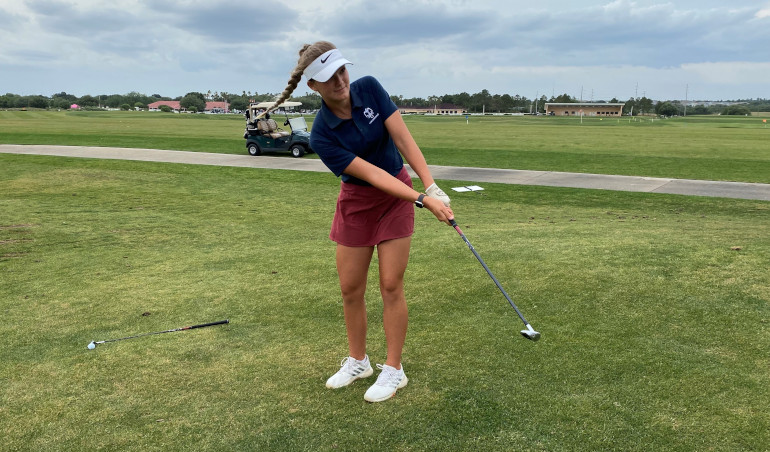 Symone Ripley is making the most of a short junior golf career.
Clark Stork

Saskatoon’s Symone Ripley has “immersed” herself into the game of golf for the last couple years and the results are paying off in lower scores and higher expectations.

Growing up Ripley was a competitive trampolinist but in the summer of 2018 she started to “tag along” with her dad to the golf course. She fell in love with the game, started taking lessons that fall and the 18-year-old has not looked back.

“I love spending time outdoors and meeting so many new people,” she told Golf Saskatchewan from MMG Performance just outside Orlando, Florida. “It’s something different, I like that it’s an individual sport. Everyday is different, some days are better than others. I like being able to start fresh every day.”

Getting her start later in her junior days Ripley did not have lots of time to play and practice before becoming competitive. Under the promotion from her coach Ripley decided to not only dabble in tournaments but commit 100 percent.

“I actually was not planning on playing in tournaments in my first season in 2019 and then my coach at the time was like, maybe you should try it,” she explained. “I just immersed myself in it. I learned so much, even if my golf score was not quite there. Learning all the rules and what it’s like to be in a tournament round, yeah, I just jumped in.”

Ripley played in five Junior Women’s Order of Merit events in her first season. Her work in those competitions landed her a spot on Team Saskatchewan at the Western Canada Summer Games in Swift Current. She said the experience was a highlight for her.

“It was amazing. I had never competed at a multi-sport event before. It was fun for something totally new. I loved having the ability to be on a team while still being able to play my own game. Playing with athletes from different provinces gave me an idea of what it is like to play in a larger field. I am actually still friends with a few of our roommates from the Games so that’s awesome too,” she said.

She is currently in Florida training at MMG six days a week. She will be in the Sunshine State for three months in total. Ripley has competed in a couple events while down there keeping her score in the 80’s. She said she is happy with her results and knows the experience she is receiving will pay off.

“Going into the events I had an idea of how many girls I was up against, going into the first event too it was kind of intimidating. I knew that I just had to play my own game and not worry about the leaderboard because I am at where I am at and others are at where they are at. I just have to remember that I’ve been golfing for a short period of time and not try to compare myself to those that have been golfing their entire lives,” she said.

Ripley is planning to compete in one last event in Florida before returning home to graduate. She will enter her last year of junior golf as well with her eyes set on a podium finish as the provincial championship and a national appearance. Results aside Ripley said taking a chance on the sport of golf has provided many opportunities and she encourages others to try the sport.

“If you are on the edge or thinking that you might be interested in golf just do it,” she lamented. “Get some good coaching and immerse yourself in it because looking back I would have liked to have started sooner just because my time is going so fast. It’s important to remind yourself that you are on your own path and just try your best not to compare yourself to others.”