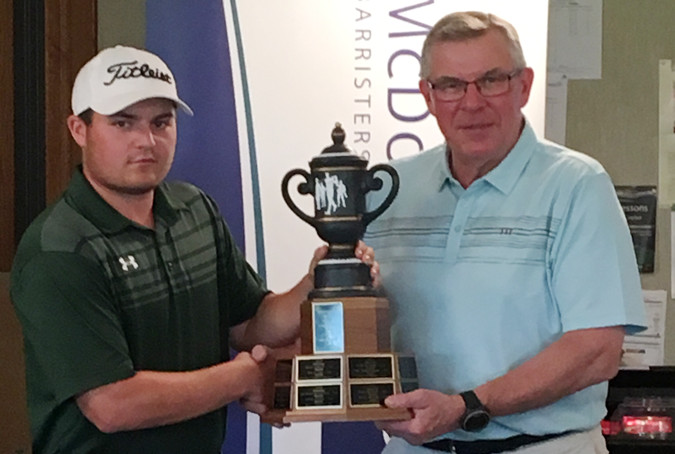 For the first time since being a junior golfer, Kipling’s Carson Harcourt is a tournament champion.

The 20-year-old Minot State University student was the lone golfer to finish under par (one under) during the 36-hole event at the Tor Hill Golf Club in Regina on the weekend. Harcourt stroked a two over par during round one, sitting two shots back of Tyler Zaba after the opening round, Harcourt had the low round of 69 over the final 18 holes to edge Yorkton’s Kade Johnson by a single shot. Zaba shot 75 on day two leaving him in third place at three over. Johnson was even for the event. Harcourt said he hit two bad shots off the tee over the two days but battled through the miscues.

“On the first day I hit one out of bounds and that resulted in a quadruple bogey,” he told Golf Saskatchewan. “That was tough to come back from. On the final day I hit one in the bush and that resulted in a bogey, I was able to minimize the damage. It seemed whenever I was on the green putting for birdie I was making it. That really helped, after you take a quadruple it’s tough to come back from.”

Harcourt grew up playing at the Kipling Golf Course before becoming a member at nearby Golf Kenosee. When he was 12-years-old he joined a Golf Saskatchewan team led by Phil Gross. Several tournament wins followed during his junior career including his last ever event. He said being victorious on the Men’s Order of Merit Tour (OOM) was a big confidence boost.

“It feels pretty good, I haven’t won since my last junior event at the Wascana Country Club, that was a couple years ago. It was a good field and it makes me realize I can play with these guys and win tournaments in the future and win college tournaments in my future too,” he said.

The full results can be found here along with the OOM standings.

The Senior Publinx champion was Rob Schneider, the Tor Hill member shot 146 (72, 74) for a four-stroke victory over Ken Rodgers, also of the Tor Hill. Mike Hammer, another Tor Hill member placed third with a nine over 151 (76, 75). The win was Schneider’s first OOM event of the season, he picked up 500 OOM points with the win, he sits in sixth place overall. Lionel Fauchoux sits in top spot.

The results from the senior’s event and OOM standings can be seen here.

The next OOM event for both the men and seniors is the Mine Supply Central Amateur Senior Men’s Division from June 30 – July 2 at Saskatoon Golf and Country Club.