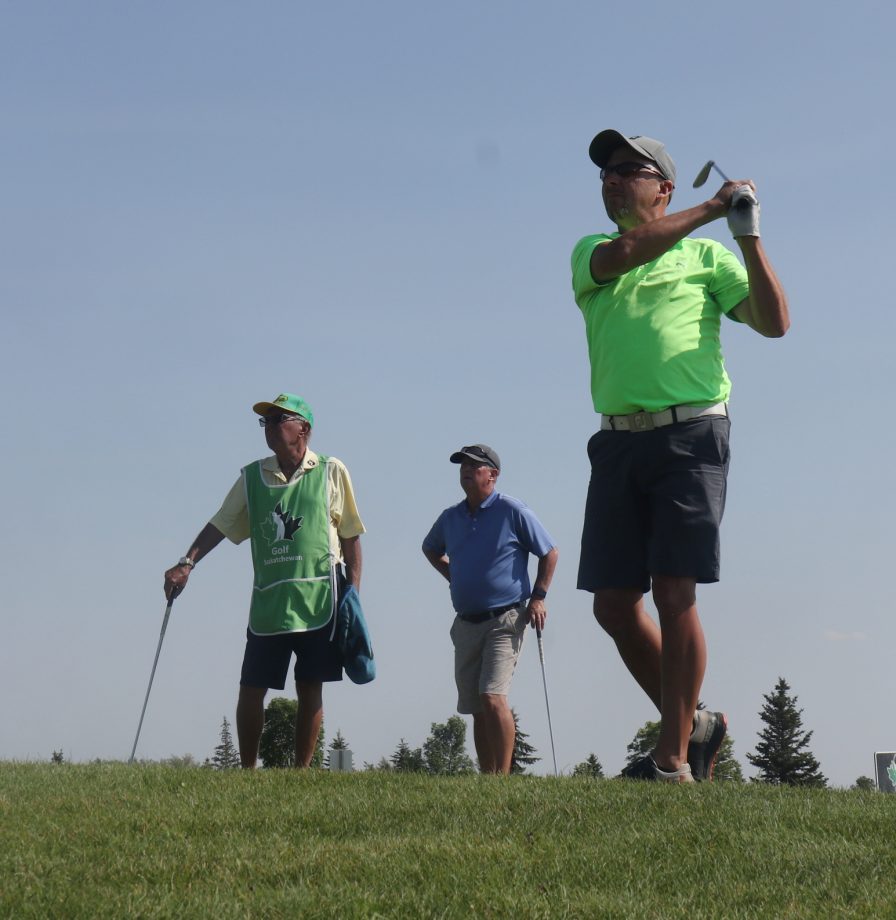 Rick Hallberg tees off during round two of the Senior Men's Championship on Wednesday in Warman.
Clark Stork

Weyburn’s Rick Hallberg called on an old friend to assist him during his round on Wednesday at the Saskatchewan Senior Men’s Championship in Warman.

The reigning provincial title holder had Norm DeLaet as his caddy during the middle round of the three day championship helping him shoot 65 and take a six shot lead over the field at The Legends Golf Course heading into Thursday’s final round.

DeLaet is the the father of PGA golfer Graham and now calls Warman home. Hallberg said casually after the round that having DeLaet’s knowledge did play a part.

“Normie is great to have on the bag,” Hallberg said. “We’ve played a lot of golf together, he knows his stuff obviously. He’ll be back tomorrow”

Hallberg is searching for his second straight Saskatchewan victory and third in four years.

2016 champion George Janson is in second place at 2-under par. Swift Current’s Brent Wotypka is in third place at 1-under par. Lavern Arndt and Martin Ring are within striking distance of a medal at 1-over par.

Hallberg also leads the mid-masters (40 and over) division thanks to his great round of 65 on Wednesday. He has a five shot cushion over Saskatoon’s Scott Allan. First round leader Chris Reid is third at 1-under par, the Meadow Lake product is in third place.

The final round of the championships will begin at 7 a.m. on Thursday.

Regina’s Kim Walker is 18 holes away from her second Saskatchewan Senior Championship.

The Wascana Country Club member went into the second round tied with seven-time winner Lorie Boyle at 3-over par. The lead is just two shots going into the final round, Walker carded a 76 on Wednesday, Boyle shot 78.

Sue Skinner of Rosetown sits third at 10-over par, 2013 champion Denise Wilson of Swift Current is fourth at 12-over.