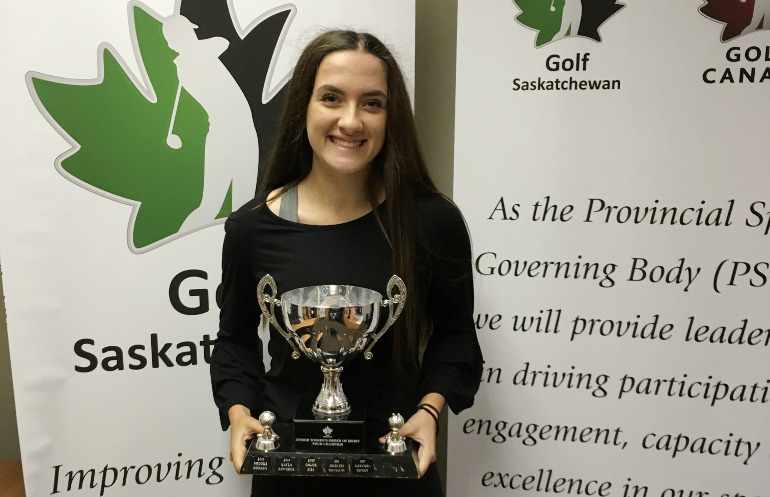 Sarah Grieve is the under-19 women's Order of Merit champion for 2018.

Grieve, 15, was the OMT champion last year in the under-15 category, this season she won the under-19 age group. She said a second straight championship was on her mind from the start of the season.

“It definitely was my goal going into the season because I knew I would be playing all the Maple Leaf Junior Tour (MJT) events to get as much experience as possible,” Grieve told Golf Saskatchewan. “It was awesome winning the OMT, I worked really hard.”

Grieve played in seven OMT sanctioned tournaments this season, the maximum number of events that can be counted towards the standings is four plus the provincial championship where Grieve tied for third. Despite growing up at Moon Lake Golf and Country Club where her dad is a part-owner Grieve said the tournament was a struggle, but she was happy to earn a position on the national team.

“I worked really hard, I practiced every day for a couple hours going into provincials. It was a grind, but it was worth it,” she said.

Overall, Grieve accumulated 3,025 points led by 1,050 gained at the 68th Junior Women’s Championship at Moon Lake. She won her age group in the last two MJT events of the season including the Tour Championship in Swift Current.

Grieve was one of four Saskatchewan junior women to play at the Beach Grove Golf Club in Tsawwassen, British Columbia for the Canadian Junior Girl’s Championship. She said being a part of Team Saskatchewan was a memorable moment in her young career both on and off the course.

“It was so much fun, I love the three girls (Carey McLean, Ella Kozak, Brooklin Fry) I went with, we all had a lot of fun. It was a really great experience because you get to meet so many new people there and play on courses you’ve never played before. The two girls I played with there were so nice and encouraging, it’s nice to see people from other places that are so nice, it was a great experience,” she said.

Grieve is a multi-sport athlete, she is a figure skater year-round while playing golf. She admitted it’s a toss up between the sports most days, but she said a post-secondary golf opportunity is on her radar once the grade 11 student graduates from high school.

You can see the complete under-19 girls OMT standings here.