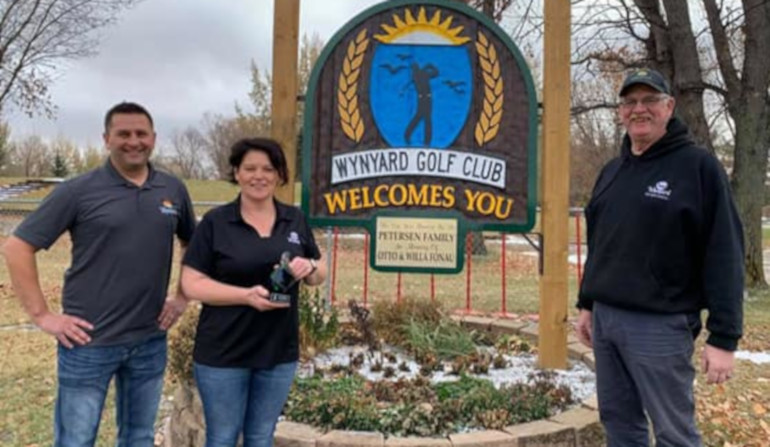 Last October the town of Wynyard cut the ribbon and opened their new multi-sport recreation facility that houses the community’s rink and golf course clubhouse.

The $11.4 million project replaced the courses old clubhouse that was once actually a one room school. The facility was an instant hit and served the town and surrounding area wonderfully through their first hockey season before COVID-19 shut down the world. Director of Leisure Services Sigourney Hoytfox said once the government allowed golf courses to open in May the season went great.

“Our rounds were up from the year before even with COVID,” she told Golf Saskatchewan. “We did very well. I think everywhere around the province is probably in a similar situation where people weren’t travelling as much so they were taking part in recreational activities at home which benefitted us.”

As restrictions were lifted progressively through the summer such as restaurants allowed to reopen with capacities and social distancing guidelines Hoytfox said the new facility was a blessing for the club and town.

“We have a lobby area with 200 capacity and a second-floor lounge with a 200-person capacity so even with the regulations in place that said spread out, have six feet between tables, that sort of thing, we never had to turn anyone away. It was fantastic, it worked out really well,” she said.

The course was able to go ahead with their annual Wynyard Monarchs Senior Hockey Team fundraising tournament but postponed their 18-hole Ultimate Ace event in August. The club has a waiting list for the tournament and hopes it can return in 2021. The course also had a wildly successful Chase the Ace fundraiser that was finally awarded on the last night of the weekly run event. The winner took home over $43,000 and the club generated a large profit on ticket, food, and beverage sales while keeping all protocols followed. Hoytfox said easing into the year with those restrictions allowed the administrators to find the most efficient ways to conduct business.

“We heard nothing but good things from our golfers this year. They were very happy with how things were set up. We took advantage with the fact moving into the new building and the COVID restrictions it made the whole golf club and course a more professional course. A lot of the changes we’re going to hold onto even post COVID,” she said.

Capping the season the town was awarded the Cecil Nobes Facility Award of Excellence from the Saskatchewan Parks and Recreation Association (SPRA). The community applied to receive the award based on the building that heavily improved the town’s carbon footprint. The clubhouse and arena are now under one roof, all the lights are LED and the facility recaptures heat from the ice plant. Hoytfox said the award would normally be handed out at the SPRA annual convention but that will happen virtually which is another benefit as they simply wanted to showcase the amount of work that’s went into the facility.

“That’s exactly it, we didn’t get any money for the award, it’s simply to showcase the building. I feel we lucked out, instead of the banquet the association came out and they did a promotional video for the facility that they will use to showcase the award but the community gets that video and can use it down the road to showcase what we have,” she continued.

The executive of the golf club is still pondering what to do with the Chase the Ace funds but Hoytfox hinted at a second-floor deck overlooking the course. The group will be meeting in the future to discuss their next upgrade.