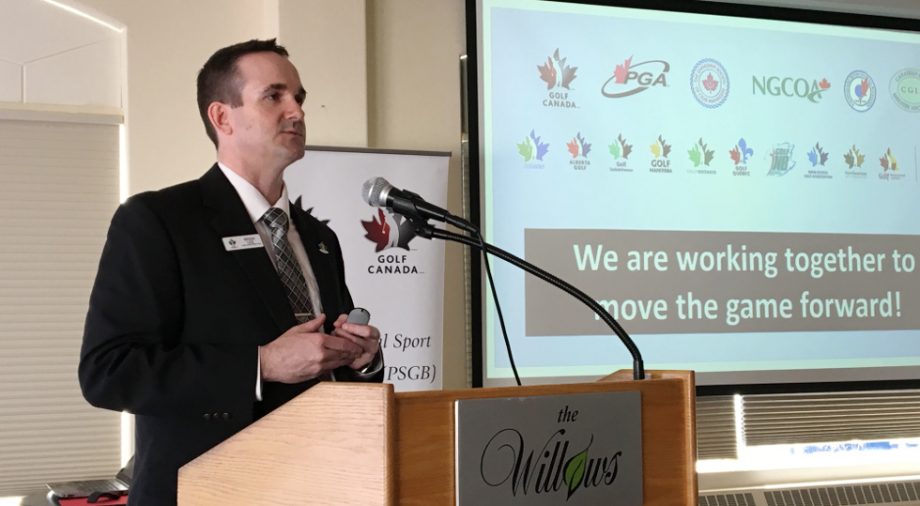 Members and stakeholders within Golf Saskatchewan travelled to the Willows in Saskatoon Saturday for the organization’s annual general meeting.

The almost 50 attendees heard from outgoing president Kyle Mulligan, Golf Canada’s Susan MacMillon and Laura Small spoke and CEO Laurence Applebaum provided a video message praising the work of Saskatchewan’s golf body. Golf Saskatchewan executive Director Brian Lee also spoke to the crowd, that likely would have been larger except for 18 people attending a coach’s seminar in the same building. Lee said 2017 was an above par year for the association.

“Our board passed a deficit budget in the beginning of 2017, but we actually came under that particular number with some year end adjustments,” he said after the new board briefly met. “I know from the amount of people that played our championships and attendance on courses province wide, overall we had a very successful year.”

Grassroot programs such as the CN Future Links initiative up to the professional competitor’s experiences last year were among the highlights for Lee in 2017. With a full slate of events in store this season including Golf Fore a Cure tournaments across Saskatchewan raising money for breast cancer research women’s golf is going to be a focus. Lee said an LPGA event in Regina will lead the way.

“We’re definitely looking forward to the event from Aug. 20 to 26 when the Wascana Golf and Country Club hosts the LPGA event. The 100th playing of our amateur women’s championship is a major highlight along with a celebration of women’s golf that is going to take place on June 29,” Lee said.

More details will be released shortly regarding that event. The financial details were provided via treasurer Todd Bergstresser. The upcoming budget year shows a deficit of roughly $84,000. Lee said a larger staff and planning for the CP Women’s Open and the group’s role in the tournament is the reason.

“We have a very strong reserve fund just in case,” Lee explained. “This is a one-time expenditure, it’s not something we will do year over year, the board is aware of that. It also doesn’t include any sponsorship deals unless the invoice has been signed,” Lee said.

An election occurred as well filling four seats on the executive board. Kyle Mullligan concluded his two-years as president but will remain on the board in the past president role. Former vice-president Delbert Betnar is the new Golf Saskatchewan president. Bergstresser remains on the board as well and keeps his title of treasurer. Don Kunkel is the new vice-president. Kevin Duchscherer, Judy Sefton, Ben Findlay will continue to serve on the board. Jasmine Jackman and Larry Wagman join the group. Mark Galambos and Dave Forster’s terms on the board came to an end. Golf Saskatchewan is pleased with the work the outgoing, returning and new members are providing.

The 100th women’s amateur women’s event is next up for Golf Saskatchewan at the end of June at the Harbor Golf Club and Resort. Courses across Saskatchewan are starting to open this weekend. Lee said the season is here and excitement for a busy summer is building.

“Get out and play, find someone that has never tried it and encourage them to try this great game,” he said.