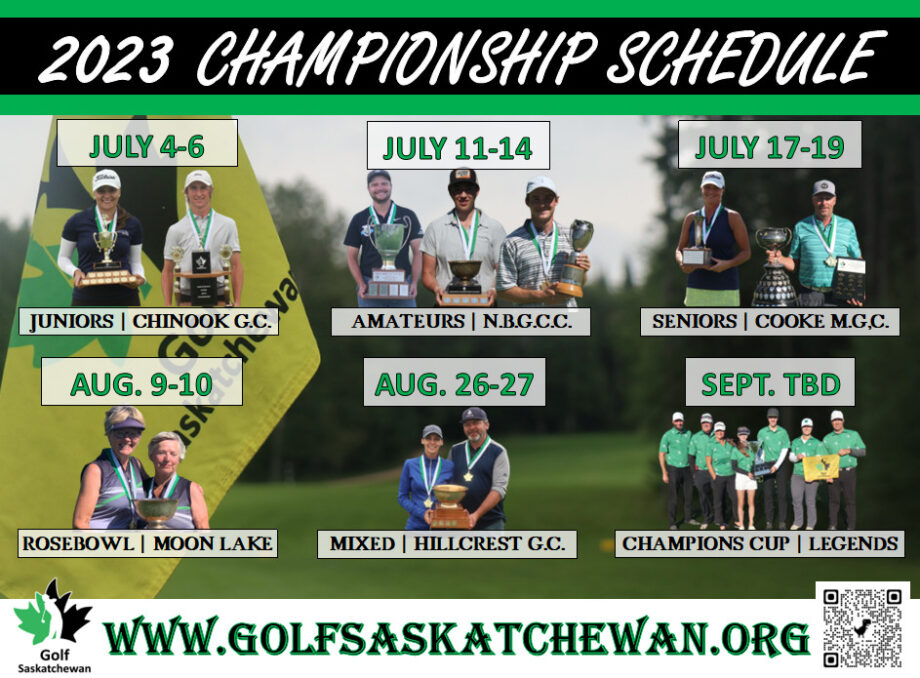 As usual, the Saskatchewan Junior Women’s and Men’s Championships will tee up the season on July 4-6 in Swift Current at Chinook Golf Club. The junior championships were last hosted by Chinook in 2017, Melville’s Chloe Sies won her second straight championship that year, Humboldt’s Tayden Wallin was the junior men’s winner.

The junior championships were also held in Swift Current in 2020 at Elmwood Golf Club.

The last time the N.B.G.C.C. hosted a provincial event was 2017 with the Senior Championships being played.

Cooke hosted the amateur championships this past season selling out with 150 players. The event will run from July 17-19.

“We are very happy to announce the 2023 schedule,” said Golf Saskatchewan Tournament Director Steve Ryde said. “Golf Saskatchewan is coming off an unbelievable season and look to build on that. Chinook is a top-notch club to host the best juniors in Saskatchewan, North Battleford has one of the premier golf courses in Saskatchewan, Cooke hosted the most successful tournament we’ve had in recent memory this year, these clubs will make awesome hosts.”

All individual championships will be qualifying events for Canadian Championships. Golf Canada will announce their championship schedule in the future.

Golf Saskatchewan is excited to welcome the Rosebowl at Moon Lake Golf and Country Club just south of Saskatoon on Aug. 9-10. The 36-hole two-day net-team women’s event has a strong history with over 50 years of the tournament being held.

The Mixed Championship will be held on Aug. 26-27 at Hillcrest Golf Club in Moose Jaw. Golf Saskatchewan last had an event at the course in 2021 when the junior championships were held there.

The season will end with the Champions Cup, a team event featuring club champion representatives from across the province. The one-day event will be hosted at The Legends Golf Club. The date is still pending; however, it will be played around the middle of September allowing clubs to finalize plans to send players to the tournament. Last season was the first year with over 60 players competing.

“Returning the Rosebowl to the schedule at fantastic Moon Lake and having the mixed at Hillcrest is exciting because it’s a fun course to play, the spa is there, just a great location for the event, and of course the Champions Cup will be bigger and better. 2023 will be great,” Ryde concluded.

Registration for all events will open on April 15.