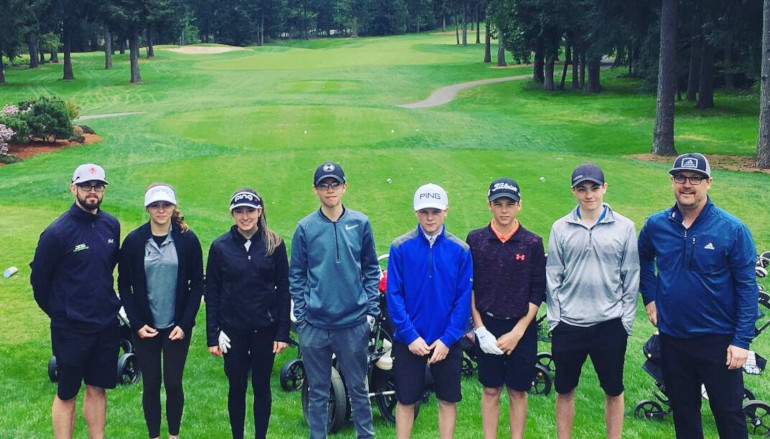 By all accounts the 2019 Golf Saskatchewan Easter Camp at Crown Isle Resort in Courtenay, British Columbia was a rousing success.

Autumn Neiszner, Ella Kozak, Jackson Wingert, Cole Jenkins, Kaiden McNabb, and Hudson Malinoski along with coaches Steve Ryde and Jason Schneider took part in the trip. Each day the group was introduced to the “top 20” new rules code for 2019 during breakfast, this helped stimulate the conversation about the changes to the rules in golf. During the week, the players also learned how to prep for tournaments, such as pre shot routines, warmups, time management, mental training, multiple skills challenges. Jenkins, 17, received the trip as a Christmas present from his parents. He said the week was a fantastic experience.

“That was probably one of the most fun trips I’ve ever had,” he told Golf Saskatchewan. “It was awesome knowing you are going to have a full week to golf in B.C. at such a nice course.”

One of the reasons Ryde chose Crown Isle for the trip was the course conditions. The resort is hosting a Mackenzie Tour event in the days following the week off school for students allowing them to take part. During the final day of the trip, Jenkins played his last round alongside upcoming professional Mike Perchak. Jenkins (pictured above) said he was very accommodating, and they continue to be in touch.

“We found out the Q-school event was going so that was cool meeting one of the pros. I’ve been messaging him over Instagram a couple times seeing how he’s doing and talking to him about university in the States. He’s a super cool guy,” Jenkins said.

The grade 11 Prince Albert student is also a member of the Golf Saskatchewan High-Performance Team (HPP) this year. He will play his first Order of Merit (OMT) event this weekend in Estevan at the Maple Leaf Junior Tour (MJT) at TS&M Woodlawn. He said reaching nationals in the juniors is a goal over the next couple years and getting a scholarship. Overall, he said golf is a sport he absolutely loves to play.

“I’ve been golfing since I have been walking pretty much,” he said. “It has been one of those sports you are never satisfied with, you always want to get better. I love everything about it, it’s so interesting to me.”

As for the Easter Camp, he highly recommends other junior golfers to take advantage of the experience in future years.

“Golfing everyday was awesome, super fun. Steven and Jason were awesome coaches to have there. We did lots of practicing after rounds too which is helpful. It was just the best thing ever, it was super fun,” Jenkins said.

Wingert, 15, was also very pleased with the weeklong trip. The grade 9 Saskatoon resident got his start playing Wildwood and Silverwood in the Bridge City. He is also a member of the HPP squad. He said the camp was a bonus to what he’s already learned to start the season.

“At first I joined the HPP program and thought the camp would be fun and a good learning experience and my parents let me go. It was really fun, lots of golf, practice, staying at the hotels, it was a really nice place,” he said.

Wingert (pictured below) will also get his OMT season underway in Estevan this upcoming weekend. With a few years left of high school and a chance to improve his game he said post secondary golf is hopefully in his future.

“I would like to go far and get a scholarship, that would be awesome. I hope to also do well at juniors and go to nationals,” he said.

For Wingert, golf is also a release from school and other sports.

“It’s time to think about other things, have fun, practice is fun, you learn more and you get to play with your buddies,” he said.

Ryde and Schneider are already in the planning stages for the 2020 Easter Camp trip.