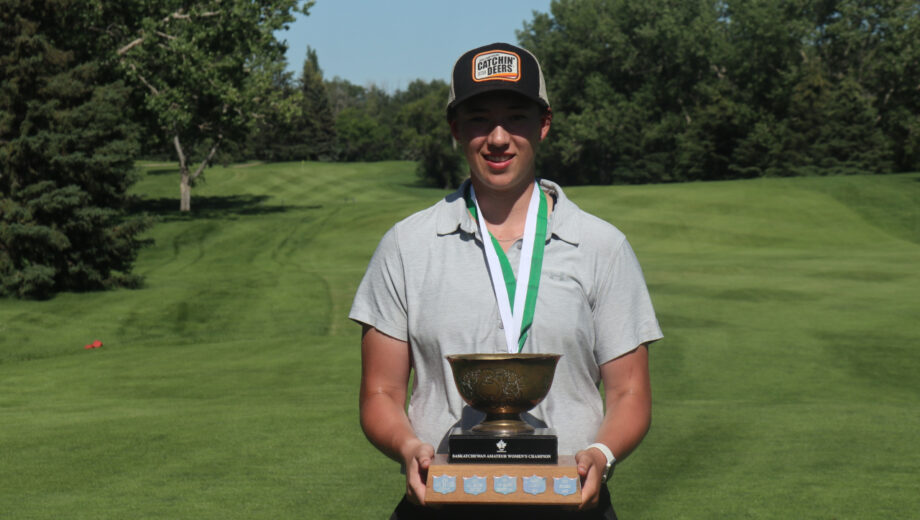 With Cooke Municipal Golf Course in pristine shape and weather that forced just one minor delay on Friday morning, the combination of the Amateur Women’s, Amateur Men’s, and Mid-Amateur (25+) Championships is being hailed as one of the top events in recent memory.

In the women’s championship that ran from Tuesday to Thursday, Shell Lake’s Brooklin Fry claimed her second provincial women’s title. The 17-year-old fought back from an eight shot deficit after round one to add the trophy to her crowded mantle. Fry has won three junior championships as well. She said the feeling of winning is still special.

“It’s pretty exciting, I had a little bit of a rough start,” Fry said after the win Thursday afternoon. “I found my competitive push the last couple days and it ended with a bang.”

Sarah Grieve of Saskatoon placed second, Hallie Krozier and Autumn Neiszner, both of Regina tied for third and needed a playoff to decide who could represent Saskatchewan at the Canadian Amateur Women’s Championship at the Westmount Golf Club in Windsor, Ontario later this month.

The complete results can be seen here, the Saskatchewan team will be named on Sunday. The tournament begins on Tuesday.

Prince Albert’s Brett Henry had a week to remember winning the Saskatchewan Mid-Amateur Championship on Thursday before coming up just short of an amateur win.

Henry just outshot fellow Cooke member and three-time reigning champion Danny Klughart by three shots thanks to a slick 65 on the final day. Henry said getting his hands on a provincial championship on his home course is something he won’t forget.

“I’ve been waiting for this for a long time,” he said. “I usually don’t play well in the big events. I usually fade away. When it comes to the Canadian events that’s usually where I getting it going. This is the first time I put it all together and it’s nice to do it on my home course.”

Klughart and North Battleford’s Scott Thompson earned the right to represent Saskatchewan at the Canadian Mid-Amateur Championship in Thornhill, Ontario in late August.

It was a repeat performance for Saskatoon’s Roman Timmerman on Friday in Prince Albert as he claimed his second straight amateur win.

The 23-year-old didn’t win in record breaking fashion like last year in Swift Current thanks to a late surge from Henry. Timmerman hung on for a one shot win in what could be his final amateur event in Saskatchewan for the foreseeable future.

“It feels awesome, definitely different than last year. I had Brett putting some pressure on me in the closing holes. He kept it interesting but I am very happy to have won this twice,” he said.

Henry was the silver medal winner three strokes behind Timmerman, college bound junior Alex Swinnerton earned the bronze medal and a chance to play for Team Saskatchewan at the Canadian Amateur Championship from Aug. 1 to 4 at Point Grey Golf & Country Club in Vancouver.

Another highlight of the events was two junior golfers getting hole-in-ones.