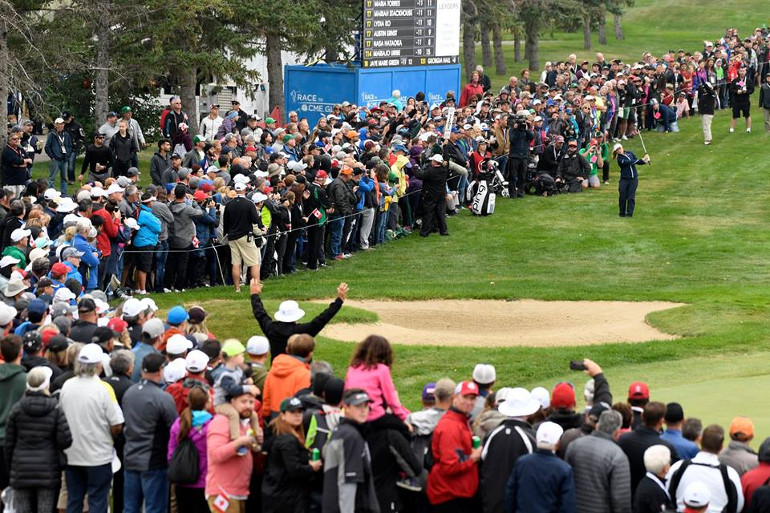 The CP Women's Open in Regina was the second highest attended event ever in it's history. Photo-Golf Canada

The hype of the CP Women’s Open in Regina is starting to fade but the legacy of the event will continue for years.

Golf Canada Tournament Director Ryan Paul said the event is still the “talk of the office” since Canadian superstar Brooke Henderson captured the title on Aug. 26 at the Wascana Country Club. Paul said the first LPGA Tour event held in Saskatchewan was spectacular.

“Seeing this province hasn’t had an event before, it was important for Golf Canada as we look to grow the game across the country. Saskatchewan has a short summer but a strong golf community so being able to bring a professional, international sporting event to the province was big. I think everyone in Regina, Saskatchewan, and the surround ding provinces bought in and made it a great event,” Paul said.

Henderson, a native of Smith Falls, Ont. became the first Canadian to win the event since Jocelyne Bourassa in 1973. Only four Canadians have won professional golf tournaments in their native land. Paul said the event would have been a huge success even without Henderson captivating the fans for four days.

“You could see it when she was in the hunt,” Paul said. “It will do wonders for the game, when you see the little boys and girls in Ping hats and ‘Brooke’s Brigade’ tee-shirts, it really impacts the sport in a positive way. Her winning was celebrated throughout the country. Our event has a national reach but when a Canadian wins, and a Canadian like Brooke wins it really inspires new golfers and puts the CP Women’s Open on the global scale.”

The tournament, the first ever LPGA event in Saskatchewan saw over 47,000 people attend. Last year’s CP Women’s Open event in Ottawa at Henderson’s home course is the only other event more attended. Paul said the spectators were incredible all week long.

“We’re trying to prepare our closing ceremonies and we have a guy that is going to sing Oh Canada, it’s the first time we have ever done this, so we’ve got it all set, and everyone starts singing it on their own. That was pretty special, that makes you proud to be a Canadian,” he said.

The LPGA and Golf Canada base their decision on host tournament sites with several qualifications. Canadian Pacific, through their sponsorship encourages destinations with a healthy supply of customer and client relationships as well as a strong charitable focus. The Jim Pattison Children’s Hospital Foundation was the recipient of a portion of this year’s proceeds. Paul said the idea of an LPGA event returning to Saskatchewan is exciting.

“I can’t really talk about why this is the first time, it’s definitely not the last. The event on many levels was positive for us,” he said.