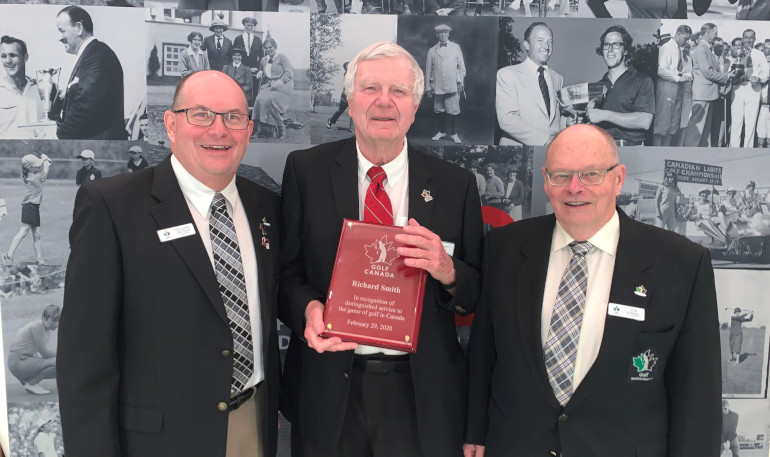 Long-time Golf Saskatchewan volunteer Richard Smith has been honoured by the nation’s governing body of the sport at the amateur level.

Originally announced by Golf Canada on Feb. 21, Smith was officially recognized on Feb. 28 at the Golf Canada annual general meeting in Mississauga, Ont. The Katepwa Beach resident has been involved with Golf Saskatchewan for 20 years and Golf Canada for another 10. Smith has been involved in several areas of the game including course rating, scoring, starting, the executive, and others. Always humble, Smith didn’t take too much credit to the award.

“We volunteer because we love what we do,” he said.

Golf Saskatchewan Executive Director Brian Lee has worked alongside Smith for almost the entire 20 years of Smith’s tenure assisting the organization across all areas. Lee said Smith has provided countless hours and knowledge throughout his experience with Golf Saskatchewan.

“When you talk about Richard Smith you have an individual who has given almost 20 years of his life assisting the game of golf in the province,” Lee said. “He is one of those individuals you wish associations could make more of. His dedication to policies, bylaws, and other matters for our organization are up to speed, whether it is his countless hours towards course rating and ensuring all the courses have been rated with adequate teams and spearheading that; or becoming president. He’s just been a tremendous asset to our association. On behalf of our organization and all our member clubs, congratulations Richard, you are well deserving of this award.”

Most recently Smith has been a guiding light during the release of the new World Handicap System working with multi international golf groups to roll the extensive program out earlier this year. Golf Canada President Charlie Beaulieu thanked Smith for his work at the awards banquet in Ontario.

“This has been a huge undertaking by the international golf community and Richard has played an important role. Richard’s commitment to handicapping and course rating has been felt across the country,” Beaulieu said.

The Golf Canada Distinguished Service Award has been handed out since 1993.