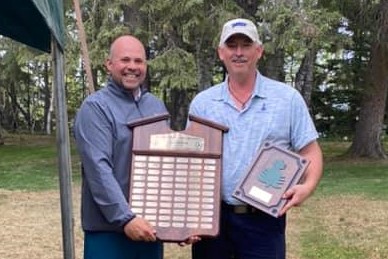 Medicine Hat’s Warren Gnam has his second Senior Lobstick championship after outlasting Rick Hallberg in a four-hole playoff on Thursday.

Playing in his 39th Lobstick tournament and fifth as a senior, Gnam said winning the event is always special.

“It feels good, it’s always nice to get a win. You never know how many chances you are going to get,” he said.

He did so in dramatic fashion beating Hallberg with a birdie on the fourth playoff hole. He said Hallberg was within an inch of winning outright on the 54th hole.

“The three of us [Glen Erickson finished third] were all close all day long, kind of flip-flopped back-and-forth. I had a one shot lead I thought playing 18 and I bogeyed, Rick had about a 15-foot putt for birdie and left it about an inch short, so we tied,” Gnam explained.

Ironically it was a long putt of Gnam’s that gave him the victory.

“We both had chances, we weren’t able to make anything until number four, I made a birdie from just off the green, sunk about a 20-foot putt,” he said.

This is Gnam’s second senior win. He was the Open winner in 1984, his first year in the tournament. He also won the 2007 Saskatchewan Mid-Amateur Championship. Gnam will compete in next week’s Men’s Lobstick that starts on June 13.