Gilewich; Brandon; and Wright heading to Hall of Fame 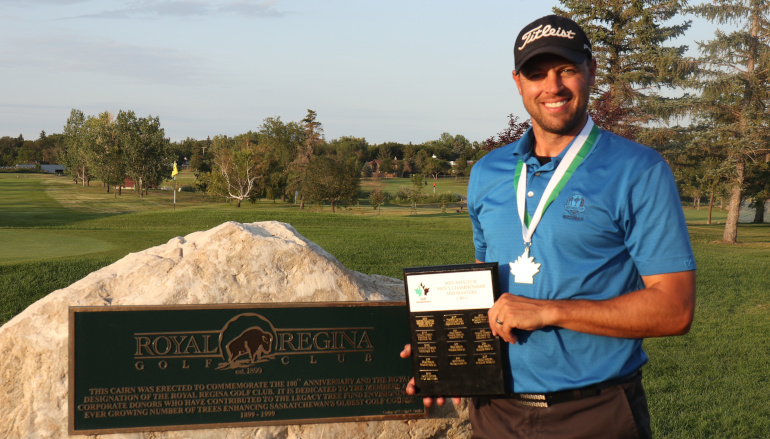 Tyler Wright is one of three Sask. Golf Hall of Fame inductees this year.

Randy Gilewich, Gary Brandon, and Tyler Wright are the 2019 inductees heading into the Saskatchewan Golf Hall of Fame.

The honour for Wright, 41, comes on the heels of a provincial mid-master’s (40 +) championship earlier this month at the Royal Regina Golf Club. The win added to his already impressive golf resume. He won the 2017 Saskatchewan amateur championship as well as the provincial mid-amateur championship in 2014 and 2016. The Wascana Country Club member has competed nationally as a member of the Saskatchewan Willingdon Cup team in 2001, 2005, 2014, 2015, and 2017, and five more nationals as a member of the Saskatchewan mid-amateur team (2007, 2008, 2014, 2016, 2017).  At the Wascana in 2017 Tyler finished fifth, the best finish ever for a Saskatchewan golfer at the Canadian Mid-Amateur Championship.

Saskatchewan Golf Hall of Fame Secretary Brian Lee said despite his age, Wright has all the credentials for the honour.

“He is not an old player by any means but Tyler’s drive to excel at golf and other sports makes him a contender at every event. He has shown true sportsmanship for Saskatchewan at provincial and national scenes for years. We hope we are able to add to his induction resume for decades to follow,” Lee said.

Wright was inducted into the Regina Sports Hall of Fame in 2015 for his excellence in both golf and basketball.

Brandon is going to be enshrined posthumously as he passed away in 2009.

He became a member of the PGA of Saskatchewan in 1983 and began a career at the Melfort Golf and Country that spanned 18 years. During his time in Melfort Brandon developed junior programs, taught lessons, and revived their men’s and ladies’ leagues. He also oversaw many events including the popular Left – Right Championship that now bears his name. Brandon was also a driving force behind the conception of the mid-amateur division in Saskatchewan. Lee said Brandon’s contributions to the sport make him a worthy Hall of Fame inductee.

“Although I did not have a chance to meet Gary in person, he was described as a true family man who loved golf and making sure people had fun playing it. As a long-time golf professional in Melfort and Dauphin, his legacy still lives on to this day,” Lee said.

Brandon was named the PGA of Sask. senior player of the year in both 1998 and 1999. In 2001 he was honoured by his peers with a lifetime achievement award.

A career that has spanned four decades, Randy Gilewich has an excellent run as an amateur golfer in Saskatchewan.

He has played in seven Canadian Amateur Championships. On four of those occasions he was a member of the Saskatchewan Willingdon Cup team: 1992, 1993, 1994 and 1996, twice reaching the round of thirty-two in match play. He was a member of the Saskatchewan junior team in 1979 and participated in five national mid-amateur events between 2002 and 2017.  Adding in the Canadian Club Champions’ Championship in Nova Scotia in 1996 and the Canadian Crown Life Championship in Quebec in 1984, he has competed at the national level in most provinces.

Lee said Gilewich’s accomplishments align with the other 50 inductees currently in the Hall.

“Randy’s resume for golf is outstanding and compares to many other players in the Saskatchewan Golf Hall of Fame. While his current profession makes other people smile, his induction into the Hall of Fame is bound to make him grin from ear to ear,” he said.

He revitalized the Regina Men’s City Amateur after a ten-year hiatus, created the Saskatchewan Southern Senior Men’s Amateur in 2019, and has supported the Diamond in the Rough junior development camp at Deer Valley.

Gilewich started his career as a junior golfer in 1974 at the Wascana Country Club, he’s been a member ever since.

The three will be inducted during a gala event on Sept. 21 at the Riverside Country Club. Tickets will be available later this week.