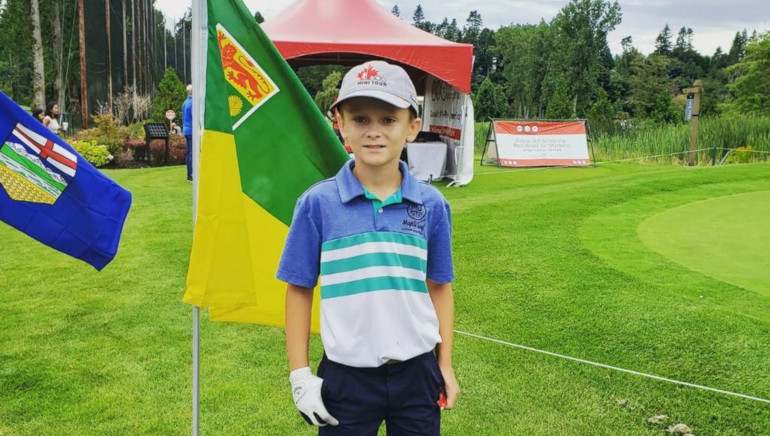 Just 10 years old, Jackson Giesbrecht is comfortable at competitive golf and wanting to get better.

Giesbrecht was five when he picked up the game hitting balls with his dad, Grant. He played his first tournament when he was just eight. Despite the young age, the Warman athlete wasn’t worried about the upped pressure of a competitive event.

“I was not nervous, just excited,” Giesbrecht told Golf Saskatchewan over the weekend.  I wanted to play tournaments. You have no pressure when just playing with family, you can take re-shots sometimes. In tournaments there is always a little more pressure. Everything counts, but I love meeting new friends and playing.”

Giesbrecht said his summer went “really good” in four events and one was “a struggle.” He did pick up his first Maple Leaf Junior Golf Tour (MJT) win in August in Estevan. He said that built his confidence over the last month of the season.

“I got my first win which was really exciting. Now I know I can win and hope to get the chance again,” he said.

His summer was capped by a trip to Tsawwassen Springs for the MJT Mini Tour National Championship on Aug. 20 and 21. Giesbrecht shot rounds of 95 and 83 on the 4,000-yard course. He said travelling to the event was different, but the experience was memorable.

“The travel was a little different as we had to wear masks,” he explained. My favourite parts were hanging out with my dad and playing with some real nice kids.”

With still plenty of junior golf in his future, Giesbrecht said he hopes to get better, compete, use the sport to receive an education, and reach the top of more podiums.

“I would like to get the chance to play in international tournaments.  I want to keep improving at all parts of my game and get more chances to compete. One day I would like to play college golf and I want to win more,” he said.

The sport will continue to be a family affair for the Giesbrecht’s as 13-year-old Dane is a fixture on the MJT and provincial events too.

“Golf is a family game for us. I am lucky to get to play with my dad, brother, cousins, grandparents, and many of my friends from school or that I have met through tournament golf,” he concluded.