Full fall season in the books for Istace 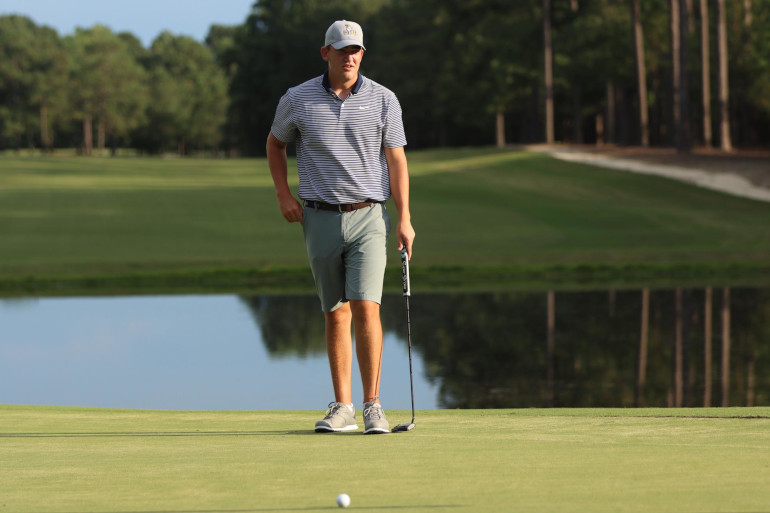 Brody Istace in action in the United States. Photo/www.ciurams.com/

Brody Istace isn’t downplaying the fact he’s ready for a break from the college golf season due to many of his friends and competitors not having a chance to play but he’s ready for some time off.

The 20-year-old Kindersley product wrapped up his third fall season this week at Columbia International University (CIU) after competing in five events in a just over a month-long stretch. The season began on Sept. 23 and 24 with the CIU Rams hosting the first event. Istace finished in fourth place. He said if it wasn’t for his struggles on the greens a win was within grasp.

“It was pretty good,” he said to Golf Saskatchewan from the university in Columbia, South Carolina where Istace has been since Aug. 15. “I wasn’t really happy with how I played. I was happy with how I struck the ball; I just couldn’t get any putts to fall. That’s how my year went, I have been really struggling changing some things with putting. I had the yips. I have been hitting the ball well, but my putting isn’t where it needs to be to be scoring.”

Istace spent the summer in Saskatchewan working at the Kindersley Golf Club and practicing. He didn’t play any events so the fourth-place finish to start the year was a great way for the collegiate season to get underway.

“It was good, I was really confident going into the tournament. It was our home course and where I was at with my ball striking that I could have won it if I was putting good. I didn’t putt good enough to get it done. I made some simple mistakes coming down the stretch,” he added.

The flat stick struggles continued into his second event where Istace finished in 64th place thanks to 83 putts over 36 holes at the Music City Invitational. He improved on that event on Oct. 12 and 13 at the AAC Fall Preview in Adairsville, Goergia shooting a 54-hole score of plus-16, 232 (80-71-81). He placed in a tie for 31st and the Rams were seventh as a team.

The NCCAA Championship was played in Palm Coast, Florida on Oct. 19 and 20. Istace fired an 88 over the first 18 holes before back-to-back rounds of 79 for a three-round total of 246. He placed tied for 17th and helped the team win a bronze medal. Despite being from Saskatchewan he said the coastal winds wreaked havoc on himself and the field.

“We were happy with how we finished but not really happy with how we played, that’s golf. The course is right on the ocean, it’s windy, it was tough to judge what the ball was going to do into 30 miles per hour winds. I’m telling you, my parents said I should be used to that but it’s not Saskatchewan winds when it’s coming off the ocean. I was blasting a four iron from 160 into the wind, it was crazy,” he joked.

The Rams finished their fall season on Oct. 27 at the Sea Palms Resort in St. Simons Island, Georgia for the Coastal GA Invite. Istace placed 43rd at 23-over par. He carded rounds of 79, 75, and 82. As a club the Rams were eighth.

The Rams will take some time off before their spring season starts in late February. Istace will return to Canada on Nov. 12 and continue with classes online. Istace said despite the mixed results he’s happy to just be playing.

“Coming into the season not even knowing if we were going to playing little lone getting to play almost every week is definitely a good outcome for the week,” he said.

Istace said some trips to Saskatoon to work with coach Clinton Schmaltz will be part of his preparation for the new year.