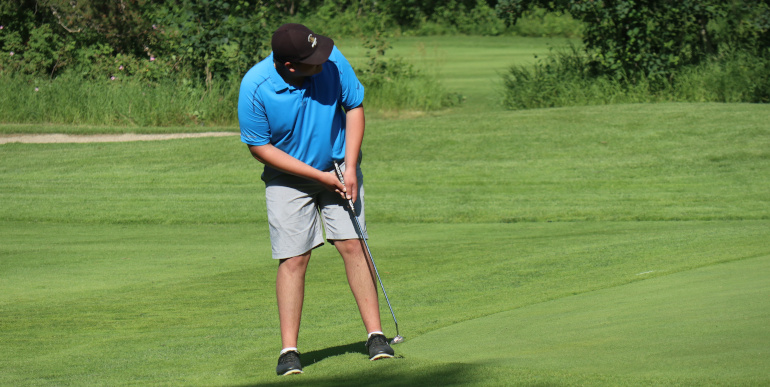 Jace Carlisle is the first round leader in the Saskatchewan Junior Men's Championship.

Reigning champion Brooklin Fry picked up where she left off last week at the Saskatchewan Women’s Amateur Championship during the opening round of the Junior Women’s provincials in Nipawin on Tuesday.

Fry, 14, carded an opening round plus-three, 75 to take a three-stroke lead over Autumn Neiszner at the Evergreen Golf Course. The Shell Lake product got her day started with a trio of pars before chipping in an eagle on hole four. She birdied hole six before running into trouble on seven and eight picking up a bogey and double bogey consecutively. Fry, who plays out of the Memorial Lake Regional Park Golf Course was even after the front nine. Another bogey on hole 10 dropped her to one-over for the day, she got that back with a birdie on 12. Four straight pars followed but trouble on 17 led to a triple bogey and the score of 75.

Neiszner’s round was the opposite, the Wascana Country Club member was five-over on the front before rebounding on the back nine going one-over par for a plus-six, 78.

Saskatoon’s Sarah Grieve sits in third place at plus-10. The leaderboard can be seen here. The junior women begin teeing off on Wednesday for their second of three rounds at 10:15 a.m.

On the junior men’s side, Estevan’s Jace Carlisle was the lone golfer to shoot under par. The TS&M Woodlawn Golf Club member stroked a solid three-under, 69 on day one of the three-day championship.

Carlisle was two-under on the front nine at the Evergreen thanks to the assistance of three birdies. He added two more on the back and a bogey to close the day with a four-stroke lead on Chase Gedak, also of Estevan. Gedak played even golf for 17 holes before bogeying 18 and dropping to one-over.

Gedak is tied with Griffin Wilson of Swift Current in third with a round of 73. Kindersley’s Brody Istace is in fourth place at plus-three, another Woodlawn player, Jayden Dudas rounds out the top five at 76.

The full results can be seen here, the boys will hit the tee blocks beginning at 8 a.m.

The top four players from both the women’s and men’s categories will be eligible for nationals. Western Canada Summer Games positions are also on the line during the 54-hole event that wraps up on Thursday.