Fry cooks up another championship, Kutcher hunts down provincial title 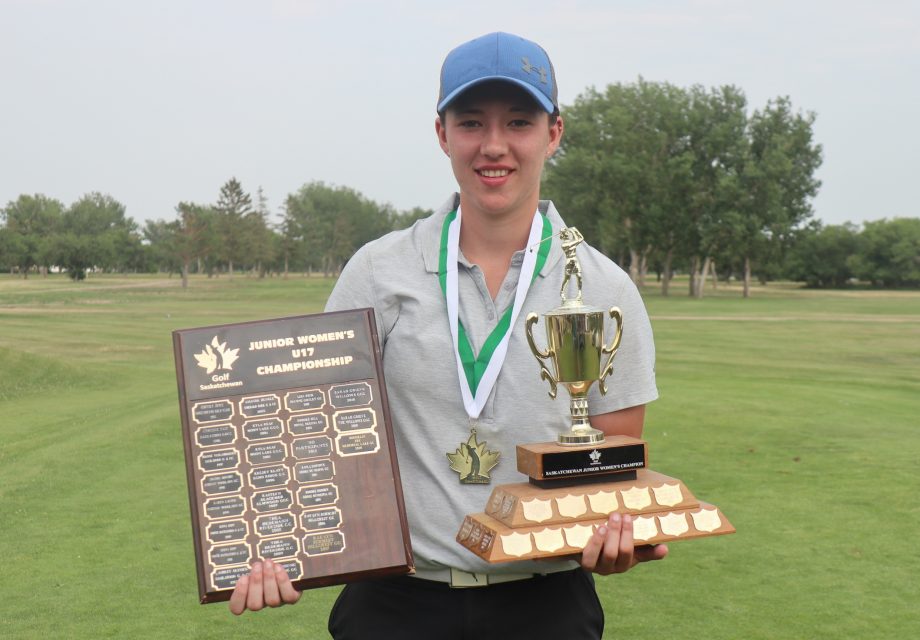 For the second straight year Broklin Fry is the Saskatchewan U-19 and U-17 Women's Champion.
Clark Stork

Third time is a charm for Shell Lake’s Brooklin Fry.

The 16-year-old won her third Saskatchewan Junior Women’s Championship in four years on Thursday at Hillcrest Golf Club in Moose Jaw. She won her second straight championship by eight shots over Saskatoon’s Sarah Grieve. Fry was coming off a fourth-place performance in Swift Current in the Women’s Amateur Championship so defending her junior title was important to her.

“It feels pretty awesome actually, this was my goal going into this year, well half of it,” she chuckled. “I was going for the women’s too, but I had some trouble with my irons that week. Right after that I was kicking myself a little bit, so I went to the range every day and worked on myself to get better this week.”

She also claimed her second straight under-17 victory.

Fry will now prepare for the Canadian Junior Girls Championship in Leduc, Alberta. The week after that she will compete in the national women’s championship in Spruce Grove.

Grieve and Yorkton’s Ella Kozak will make up the Saskatchewan team as the top three players.

Regina’s Hunter Kutcher is in his final year of junior golf and he made it count.

Kutcher made a birdie on the first playoff hole in Moose Jaw on Thursday to edge Alex Swinnerton for the championship. The Royal Regina Golf Club member said winning the title in dramatic fashion is a special moment.

“This is my first junior tournament win so it’s a pretty incredible feeling,” he said. “I really wasn’t expecting to be in this position coming into the week. It was a little bit of a slow start today, I stuck in it, made some birdies in the end and was able to make another one in the playoff.”

Kutcher climbed five positions on the leaderboard on Tuesday overtaking second round leader Tommy Danielson to punch his ticket to the Canadian Junior Boys Championship in Sainte-Julie, Quebec in August.

He will be joined by Swinnerton and Max Regier on Team Saskatchewan. Regier edged Danielson in a playoff for third place.

The complete results of the tournament can be found here.