From Wascana to the West Coast; Bernakevitch beaming in B.C. 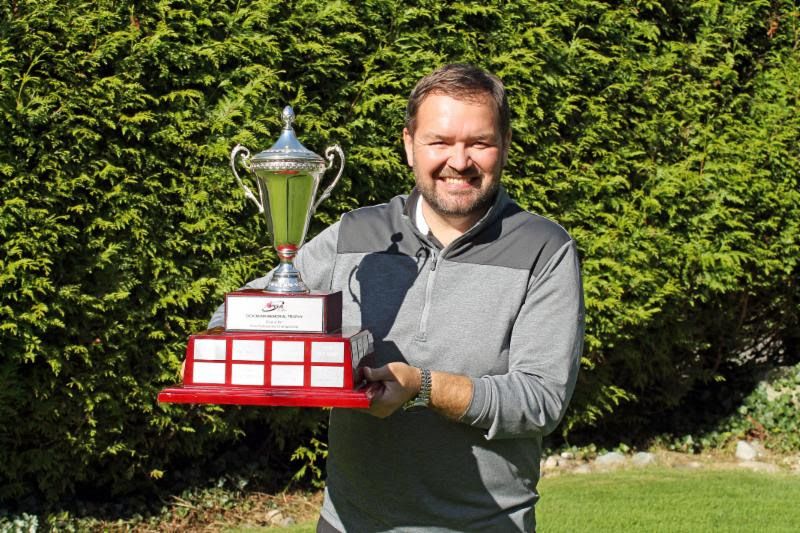 Four-time Sask. Am. champion Lindsay Bernakevich has carved a great career in B.C.

Lindsay Bernakevitch has come a long way from the sandy greens of the Kelliher Golf and Country Club where he fell in love with the game that has taken him around the world.

The Regina product, and four-time Saskatchewan men’s amateur champion has made a career out of the sport and currently has one of the most marquee positions the nation could offer, Bernakevitch, 38,  is the head professional at the prestigious Victoria Golf Club. Bernakevitch has been at the course for almost five years on the coast of the Pacific Ocean but he credits his start to Saskatchewan.

“I was the kid that my mom would drop me off at the course and I would stay there all day and she’d pick me up at the end of the day,” he told Golf Saskatchewan. “It was definitely a love affair with golf.”

As mentioned, Bernakevitch played plenty of golf in Kelliher growing up but frequented several courses in Regina as a youngster, mostly the Wascana Country Club which was near his family’s house in the Queen City. Bernakevitch’s father was, and still is an avid player. Bernakevitch played throughout high school and made several provincial junior teams before going on to college at the University of British Columbia and Western Washington. He said moving to B.C. and playing golf more frequently was important for his development. Bernakevitch said technology involving simulators and equipment is evening the landscape for golfers but climate is still the number one factor in improving your game but, it’s not the be all, end all.

Bernakevitch speaks from experience when it comes to developing later in life, yes, he did have success as a junior golfer, but it wasn’t until his post-college days where the championships began piling up including in the Saskatchewan men’s amateur four straight years. His first of four wins came, fittingly, at the Wascana Country Club in Regina in 2000. Bernakevitch followed that with championships at the Saskatoon Golf and Country Club, Nipawin’s Evergreen Golf Course and the Riverside Country Club in Saskatoon. He said those tournaments helped vault him to an excellent career.

“The first one was almost a surprise, I loved golf and I was working hard for it and suddenly, I was like oh, I am better than I think I am. After the first one it became a driving force for me to do it again and that was a huge motivator for me to try and be the best,” Bernakevitch said.

Along with representing Saskatchewan on Willingdon Cup teams four times he played for Team Canada on several occasions and represented the nation at nine different international events over the years. Bernakevitch spent another five years playing professionally on the Canadian Tour but eventually wanted to settle into a career and “stop living from a suitcase.” Still wanting to stay in golf he chose the path of course management and head professional. Based on the advice from his mentor, Dave Wood, the current CEO of Shaughnessy Golf and Country Club in Vancouver, Bernakevitch began his career at that course as the backshop manager. He recalled the advice Wood passed along to him, “take the worst job at the best course.” He followed that path and eventually he landed the position in Victoria.

“Timing is everything, big jobs in Canada don’t come available all the time. For that I was in the right place at the right time. I was at a place in my career I could handle it and the job was available. To have those things go hand in hand were fortunate for sure,” Bernakevitch said.

He does count his blessings daily, growing up in Saskatchewan playing golf about five months per year doesn’t compare to the Victoria Club that closes one day per year, Christmas Day, but Bernakevitch credits his time in the province to allow him to be where he is today.

“Saskatchewan is a special place. Your members and readers know this but the people in the province are second to none, they’re the best that are out there. I still have a soft spot in my heart for the prairies,” he said.

Bernakevitch said proof of that statement was evident when Brooke Henderson won the CP Women’s Open at the Wascana this past summer. Although not at the event itself, Bernakevitch had returned to the Wascana just prior to the tournament to play during a family visit. He said witnessing the championship on television at his one-time home course was special.

“It was neat to see a championship being played on a course I was familiar with and obviously to have Brooke win was super special for Canadians everywhere. To see a Canadian win on home soil is always special,” he said.

Bernakevitch still finds time to play despite his busy career, he is coming off his second PGA of BC Club Professional Championship last September.

You can hear much more from Bernakevitch who spoke with Golf Saskatchewan`s Clark Stork this week.