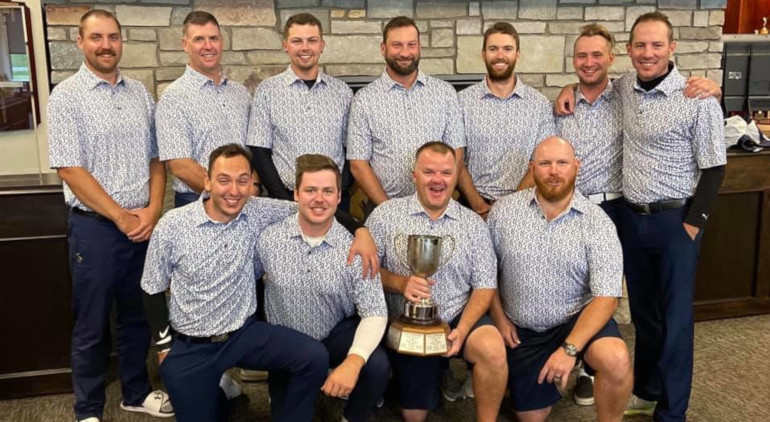 The RRGC is the winner of this years Fraser Cup.

More and more golf clubs in Saskatchewan are fielding teams and competing in inter-club matches. One of the original events was put in place a decade ago by Regina’s Tom McNall.

The 2017 Sask. Golf Hall of Fame inductee spent 22 years playing at the Royal Regina Golf Club before moving over to the Wascana Country Club in 1979. McNall reached out to a friend in Saskatoon at the Riverside Country Club regarding a Ryder Cup type event between Regina and the Bridge City. Riverside already played the Saskatoon Golf and Country Club for Saskatoon bragging rights. McNall pitched the idea of a Queen City event to Wascana CEO Greg Dukart and the Fraser Cup came to life in 2010 providing a tribute to long-time Regina golfer Dick Fraser who passed away in November 2001.

“Greg was going to do some research on what we were going to name this event,” McNall said. “I went home and was watching television, I started thinking, Dick played at both the Royal Regina and the Wascana, everybody loved him. He was a natural to name this tournament after. I called up Greg, he asked if Dick played both courses, I said yeah, and Greg said it’s done, we will call it the Fraser Cup.”

The event takes place every other year with clubs rotating being the host. Wascana had early bragging rights by winning the first two but the Royal Regina group has rebounded with the last four wins. McNall played in the first one in 2010 but hasn’t played since. He said making your club team is a serious issue and only the best players get the chance to represent their course.

“I know at the Wascana they take a lot of pride in making the team. The way they qualify they must play in the club championship and the low ten people make the team and the captains get two picks, but those picks had to play in the championship as well,” McNall explained.

When McNall and the committee were outlining the details ahead of the first event he was adamant the best amateurs made up the squads for each club.

“When I was competing there wasn’t many events for low handicappers. It was always handicapped, handicapped,” he said. “When I first sat down with the Regina club to coordinate this one of the fellas said to me, why don’t we make it handicapped? I said this is for the best players and that’s the way it’s going to be.”

McNall said he hasn’t heard specifically if there has been any memorable shots or matches throughout the event, but he is proud of the first decade and how the event is received by both courses and members.

“It’s a pretty simple story, it was just a matter of time before it was going to happen. A lot of people are going to formats like this with the better players. It’s a lot of fun, good clean fun,” he concluded.

Wascana is slated to host the event in 2022.