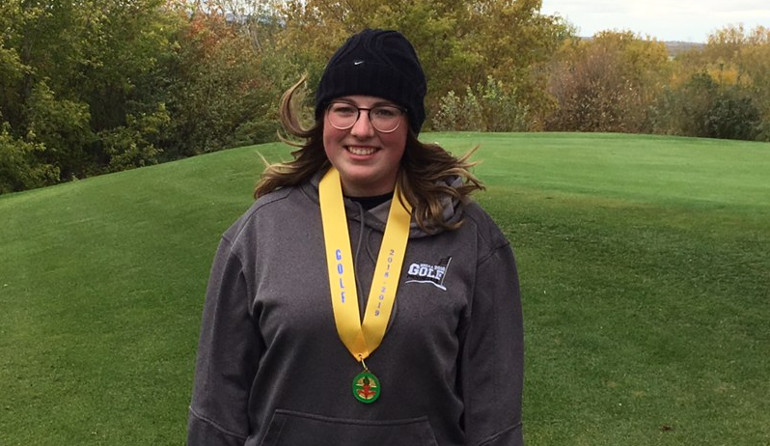 There was no silver medal for Creighton’s Lauren Fox at this year’s provincial high school girls golf championship, the grade 11 student is good as gold.

Fox, 16, followed her second-place finish at last year’s provincial championship with a seven-stroke win over Carey McLean at the North Battleford Golf and Country Club on Sept. 21 and 22. Not only did the players battle each other over 36 holes, they were forced to fend off Mother Nature and a snow storm that blew through the Western side of Saskatchewan leading up to the event. Fox said her, and the competitors adjusted during round one.

“All the girls in my group had to switch to coloured balls,” she explained to Golf Saskatchewan. “I played yellow, someone played pink and another used purple. When the ball was lying on the ground you had be right next to it to see it, you couldn’t see it from afar because the snow had wrapped around the ball.”

The golfers played lift, clean, and place rules during the event. Fox shot an 85 on day one and 86 during the second round. She said her focus wasn’t on the rest of the field going into the championship round.

“I went in knowing I had a chance to do well. I didn’t pay any attention to being in first, I knew if I did I’d lose it and I’d lose my spot. I went out on the second day and I just tried to play the best golf I could. I didn’t think about the standings or my score, I just got into a zone and played my golf. I excited when I got first,” Fox said.

She also competed in the Saskatchewan Junior Girl’s Golf Championship at Moon Lake Golf and Country Club in July placing seventh overall. Fox played in the Nipawin Evergreen’s Ladies’ Championship, a two-person scramble event earlier this month. Her and partner Veronika Duchsherer tied for first and lost in a chip-off. Overall Fox said her summer on the course was positive.

“I was happy with my performance this summer. I noticed lots of improvements from the previous summer in my score, in my decision making and as a player in general. It was a good summer,” she said.

The high school provincials will be held at the TS&M Woodlawn next year where Fox finished second in 2017. She hopes to defend her title there as a grade 12 athlete.

During the winter Fox is a hockey official, she sings in her school choir, plays the piano and practices golf at a simulator at the Creighton rink.