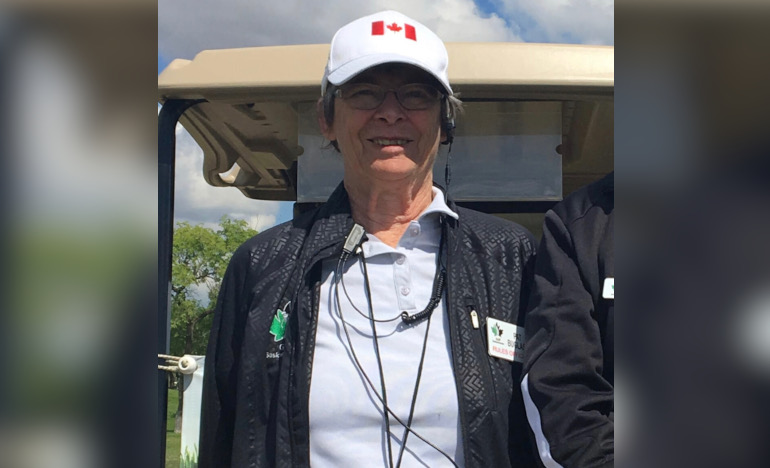 Home Club:
“I play with the Tuesday women’s league at Moon Lake. I played at Holiday Park almost from the time it opened. I still enjoy playing that course.”

Handicap Factor/Index:
“Three times what it was a few years ago.”

Rounds per year:
“20 – 25, when your golf game is as awful as mine you don’t get too excited about playing.”

How did you get involved with Golf Saskatchewan?
Course rating – “I thought it would be interesting and a challenge. I was involved almost from the beginning of the slope rating system. We started out measuring by pacing the distances to now using lasers and GPS.  Thirty years later it still seems to take us just as long to do a course.”

Rules – “When I was playing competitive golf I was always getting into some sort of predicament, so I decided I needed to know the rules to avoid penalties. I have been doing rules for 20 years. For a short period of time I had a level four designation. Most of the time I have done provincial tournaments. When the new rule book came out I had decided that I would quit. I then thought, can this old brain learn something new and pass a three-hour exam. I passed so I am still doing rules.”

What do you like about volunteering?
“The people you get to work with. I have met people from all over Saskatchewan and across the country. I have played golf courses I would never have seen and met the people who are so proud of their facilities.  I grew up with parents that insisted that if you are involved with a sport or an activity it is your duty to give back to that organization. I have never regretted becoming a volunteer it is most always a rewarding experience.”

Note – Pat was inducted into the Saskatchewan Curling Hall of Fame in 2017.