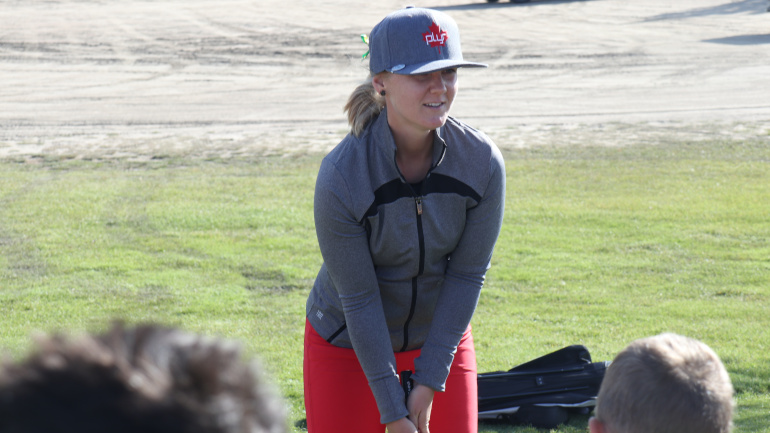 As Saskatoon’s Anna Young continues to chase her LPGA dream, the five-time Saskatchewan amateur champion is giving back to the sport as well.

On Wednesday, coincidently or not, the day the Humboldt Golf Club (HGC) celebrated their 75th anniversary, Young hosted a free, junior golf putting and chipping clinic with the help of 2018 provincial mid-amateur champion Mike Herperger, an HGC member. Young has hosted junior clinics in Saskatoon on previous occasions as well, she said the game has offered her so much it’s time to pay back.

“I love what golf has done for my life,” she said. “I love golfing and I love doing it as my job but, I just think there’s such a big opportunity for family orientation, hanging out with your friends outside away from technology. I think it’s good to get outside and not be on your phone. Golf has given me a lot of good things outside the game that I would love for future generations in Saskatchewan to enjoy the game and get into it, it’s easier to start when you are nine or 12.”

Over 20 kids showed up for the 90-minute lesson on the HGC practice green. The attendees appeared to enjoy the clinic that was fuelled by Fuzzy Peach prizes throughout the afternoon.

The Humboldt course also has some special meaning to Young, her mom was a Humboldt resident, she won her fourth of five amateur titles at the course and she was still proudly wearing her green and yellow ribbon showing support for the Humboldt Broncos, the same ribbon she wore at the CP Women’s Open in Regina last August.

“There’s always good vibes winning a tournament at a course, always good vibes. It’s really nice, I remember the range and clubhouse and course, but I was having trouble picturing the putting green. I had to come early so I could figure out where everyone had to chip from and not be in anyone’s way. I’m hoping to get a round in to,” she said.

The last time Golf Saskatchewan spoke to Young was following the Open at the Wascana Country Club. She continues to reside in Florida playing golf on a regular basis.

“I’ve been playing Mini-Tour events, state opens and Monday qualifiers,” she explained. Since I had to choose between LPGA qualifying last year and the Canadian Open which is a blessing in disguise to not have status because I was able to plan an entire schedule the way I wanted to. Hopefully it will be good preparation for next year if I have full status on the LPGA or Symetra Tour it would be good to plan every week instead of running last minute to tournaments.”

The 26-year-old is currently through stage one of the three phase process to receive an LPGA card. The next two stages will take place in October and November. She said she’s confident in her game and ability and isn’t going to do much different following the first step.

“I’m going to do exactly what I have been doing all year, I’ve been playing really well. What I have learned from my golf game I play better one shot at a time, basically living life one day at a time in preparation of that,” she said.