Fawcett recognized for work ahead of CP Women’s Open 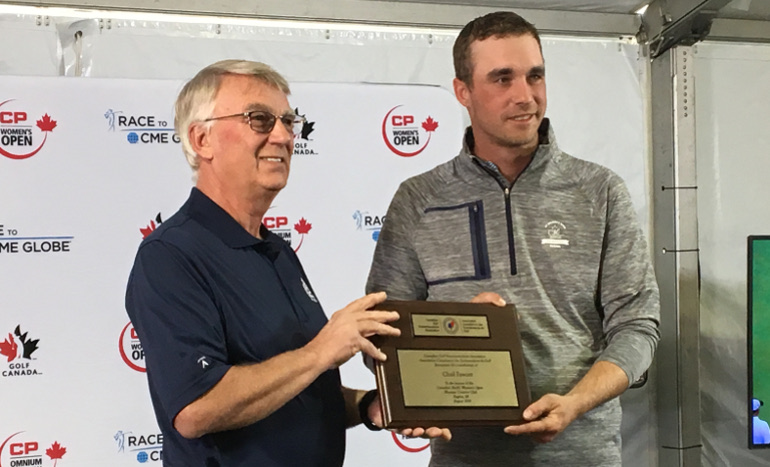 Chad Fawcett was honoured for his work in preparing for the CP Women's Open at the Wascana Country Club on Tuesday.

Wascana Country Club superintendent Chad Fawcett is being honoured for his work ahead of the 2018 CP Women’s Open.

On Tuesday, Fawcett was presented with the National Tournament Recognition Award. The 33-year-old has supervised the grounds crew for four seasons in Regina. He said receiving the award was a nice touch.

“It’s pretty special,” he told reporters at the CP Women’s Open media centre. “A lot of work has gone into this. This year in particular with the tough year we’ve had, it hasn’t been the easiest year to grow grass. To host an event like this makes me and my staff feel pretty proud.”

Fawcett oversees a crew of 17 seasonal staff and five full-time, year-round employees. This week he will utilize approximately 10 volunteers. The crew does have experience hosting marquee events, last year the Canadian Mid-Amateur Men’s Championship was held at the Wascana. Fawcett said the course will play similar.

“The rough got a little longer this year just because mainly we had a little more precipitation. A little more fertilizer went on the golf course this year just to spruce it up a bit. Playing conditions will be similar, the greens should be the same firmness as last year,” Fawcett said.

The CP Women’s Open features 89 of the top 100 golfers on the LPGA Tour and will be broadcasted in over 200 countries. The course could be showcased to upwards of one billion viewers. Fawcett said having the Wascana featured throughout the week is exciting to him and the entire staff.

“it’s going to be pretty amazing to everyone. We don’t know what to expect when we see it on television. The golf course itself is different from what you see on tv on a weekly basis. I don’t think there is very many golf courses like this one,” he said.

Tuesday featured the player’s practice round. The second Pro-Am will take place on Wednesday. The tournament will start Thursday morning with the champion being crowned on Sunday afternoon.