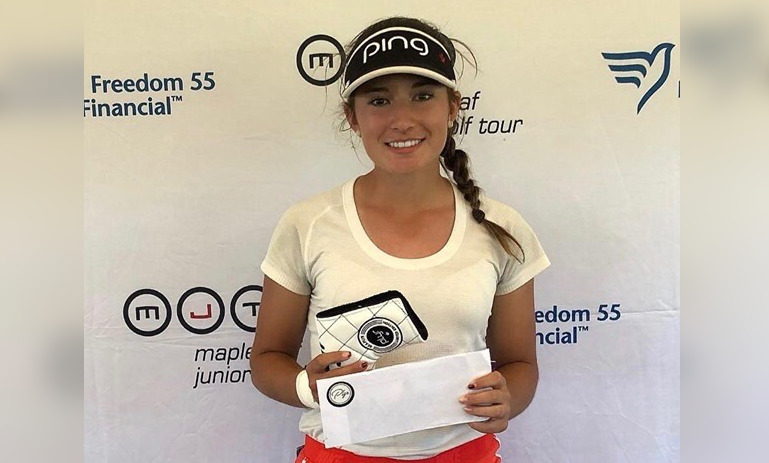 Cole Jenkins, 17, qualified for the event with a second-place finish at the Saskatchewan Zone Junior Championship at Dakota Dunes earlier this summer. The Prince Albert product placed 43rd in a field of 60 players during the 54-hole tournament at the Royal Niagara Golf Club from Sept. 20 to 22. He said competing against international players at the event was a memorable experience.

“It was nice, it was a super good experience,” he said to Golf Saskatchewan. “Just getting to know people from all over the world really. There was people from Australia, Mexico, and Florida.”

Jenkins improved by a stroke each day at the championship, he opened with an 84, shot 83 on day two and capped his tournament with an 82. He said he struck the ball well, but his short game abandoned him a little bit over the week.

“I was hitting the ball well but once I got up next to the green I had no feel it seemed like. I probably lost 20 strokes just putting and chipping. I was hitting putts on my line but, I didn’t understand what the reads were doing. It was strange,” Jenkins admitted.

While in Niagara Falls the players took in many of the tourism spots and mingled with each other. Jenkins said that made the trip extra special.

“It was awesome, I have never been there so a really cool place to be. It’s crazy how big those falls are. Everything around there is pretty cool,” he beamed.

The grade 12 student is getting set for the high school provincial championship this Friday and Saturday in Estevan at the TS&M Woodlawn Golf Club. He will also attend the MJT National Championship in Florida in November. Upon graduating he hopes golf continues to be involved with his education.

“I’ve been talking to colleges and trying to get something going there. I’ve gotten asked by a couple Div. III schools and a couple junior colleges, I am just not sure which route I want to take,” he explained.

Regina’s Autumn Neiszner qualified for the event through the Dakota Dunes tournament that she won in July. The 15-year-old also performed remarkably at the MJT National Team Challenge placing third overall and being the top Canadian girl in the field of 29. Neiszner said she’s happy with her score despite a somewhat different process to get there.

Neiszner shot a three-round total of 239 (78, 80, 81), +23 which was just three strokes back of second. She was 14 shots off the winner, Annika Rathbone of Australia. Overall the 2019 Saskatchewan junior girl’s champion was pleased with the result.

“I’m pleased with third obviously, but I feel I could have shot better every single day. I had way too many putts the last day. For the number of putts I had I am pleased with how I scored,” she said.

Much like Jenkins, Neiszner was overwhelmed by the trip and experience in Ontario. She said the relationships she gained added to the memorable trip.

“We met some very nice people from Australia, I’m friends with the two girls now,” she said. “We talk on the phone still even though we’re on the opposite sides of the world. We are really great friends. They are so nice and supportive; it was a really great experience.”

Neiszner had never been to Niagara Falls prior to the event. She was able to go behind the falls and rode of the Maid of the Mist among other tourism highlights. She said sharing those moments with her new-found friends will potentially stick with her longer than her bronze medal.

“It was so great, just walking down the street, it was almost like a mini Vegas strip. It was really cool, it was so fun hanging out with the Australians and Mexicans, all that was so fun,” Neiszner lamented.

The grade 11 student will also compete in the high school provincials this weekend and the MJT National event in November.

Both Neiszner and Jenkins competed for Central in the 15 team competition, they placed seventh. Australia was the winner.

On Wednesday the MJT announced they have dispersed over $20,000 across Canada in funding to assist players attending the national event in Florida. Neisnzer, Ella Kozak (Yorkton), Dane Giesbrecht (Warman), Thomas Danielson (Saskatoon), Alex Swinnerton (Saskatoon), Jayden Dudas (Estevan) and Keighton McNab (Saskatoon) will all be eligible to receive funds.