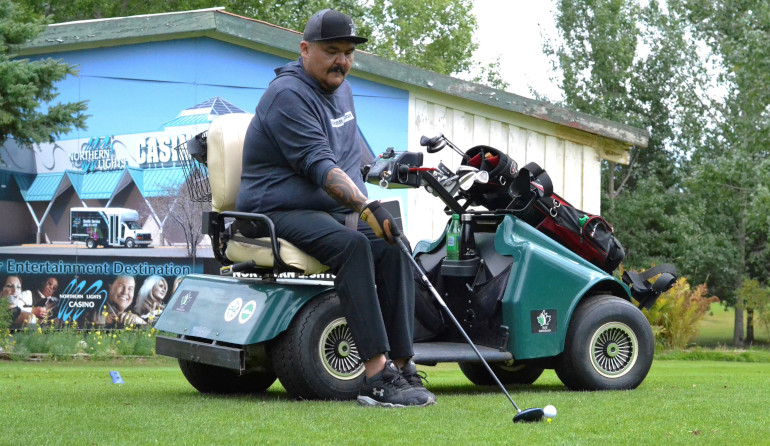 Kirk Fontaine looks down, looks ahead. He has focus in his eyes.

It’s silent, until he sends a golf ball towards the hole—and he does it swiftly with one hand.

With an adaptable chair from Golf Saskatchewan, that is housed at the Silverwood Golf Course for public use called the Solo Rider, Fontaine is able to easily move around the course.

“I find it easier to hit with one hand compared to two because I don’t have to swing in my hips,” he explained.

Fontaine was injured in a car accident about three years ago. He said he does have some movement in his legs, but they don’t have much strength.

“After I got out of the hospital and while I was home, I was losing my mind. There wasn’t much to do…but then I got myself into archery. I’m trying to get into the Paralympics for men’s recurve. I’ve been trying different sports: skeet shooting, shot put. Golf’s fun,” he said.

Fontaine explained some of the challenges: Parking spots are typically too close together for him to get out of his vehicle, restaurant tables can be too low for him to roll under and washroom stalls aren’t always accessible.

“Every day is a challenge, no matter what you do.”

Bill Lehne, SCI Saskatchewan’s board president, used Kirk as an example of the importance of having access to their services.

“He’s got the adaptive equipment to live a normal life and it’s all about inclusion. Because of those types of supports, it helps facilitate that. More importantly is Kirk’s willingness to go through that door and latch on to that new world and make it happen and make it your own. And to take that ownership is sometimes a very difficult task,” said Lehne.

He, too, has had to find that acceptance.

On Halloween of 1983, Lehne was injured in a hunting accident. He said at 18 years old, he felt invincible, but then life changed so quickly.

“I used to build houses and work in construction. So now what do you do? You’ve got to do something different. You have to go back and go to school and all that. That whole new journey, and that’s where all those doors open up and you have to go through it.”

Lehne said their goal was to raise $15,000, but also to develop awareness and bring the public together with the fundraising initiative.

While Lehne now lives in Saskatoon, he is originally from Prince Albert and is friends with the owner of Mark’s Nine Golf & Country Club. In fact, he used to live across the highway from the course.

“This is really my backyard and my friends. This is where I grew up,” he said.

For over 50 years, SCI Saskatchewan has been providing rehabilitation, employment, financial and housing support for those with spinal cord injuries and other physical disabilities.

Their annual wheelchair relay fundraiser is coming up on Sept. 21 in Saskatoon.