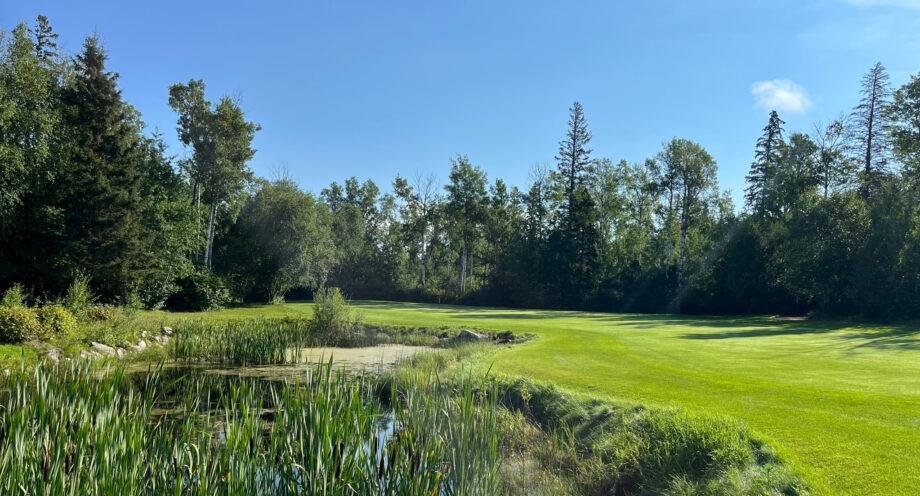 For over four decades Ross Ethier has poured his life’s work into the Emma Lake Golf Course, the now 60-year-old is starting to visualize life without the course that’s been in the Ethier family since 1979.

Ray Ethier purchased the then nine-hole course when Ross was just 16 years old. According to Ross, the purchase for his golf-fan father was a place for him and his two brothers to work in the summer and then go to university in the winter. He stuck with the course; his two siblings went off on different career paths.

The course was built in the 1960’s by Paul and Peter Kachur and opened in 1967. Ethier described the course as “swampy” with “two-by-12’s” running everywhere so you could walk. They started with drainage, updated the irrigation system in 1987, automated the system in 1990 and in 1995 the process of constructing the back nine began.

“I had an ariel photograph and I plotted it out with a compass,” Ethier said. “I walked through the bush followed by a cat, that’s how I cleared because it was solid bush. I knew what I wanted; we started off with a trail down the middle. At this time Weyerhaeuser was still open, they had to buy our wood, so this guy came out, cut it for the cost of the wood, he just kept going until I liked what I had.”

The one wish Ray had in the design was that the ninth and 18th hole must meet back at the clubhouse eliminating the need for a snack shack on the course. Ethier said he was able to appease his father, but the work essentially doubled at the club.

“Equipment wise needs, golf carts, staffing, now we have 10 guys cutting grass. We have 25 staff, the service part, the restaurant isn’t a huge profitable thing but it’s something you need to provide,” he added.

One section of the labour force at Emma Lake is the grounds crew and marshals. Ethier said a steady group of guys will “marshal” and play golf the next. One of those men was David “Shorty” Hryhor who unfortunately passed away in 2016. To this day players teeing it up on hole one at the course will see the initials S-H written in a dollar sign format in the grass remembering Hryhor.

“He was wonderful character, everyone loved that guy,” Ethier said. “Just such a lovable guy and it was a bad shock.”

Ethier admits he’s spent a long time learning about the golf industry especially the turf care aspect. Aside from the constant changes of technology and the world Ethier has turned his focus over recent years in lengthening the course. Although popular and busy most years a familiar term continued to leave Ethier in the rough, that being that Emma Lake is a “nice little golf course.”

“There are so many courses around that never change anything, they maintain, may improve a tee box or something, but when you’re adding yards, and updating greens, the length change and expansion that way, nobody else is doing that. I guess for good reason those courses feel they don’t need to, but people get bored with the same course,” Ethier said.

The course has seen 100 yards added to holes three, five, seven, and eight. They have added 50 yards to hole six and hole 17 is now close to 560 yards. Bunkers have also been added to a couple 300-yard holes for some added difficulty.

As Ethier ponders what’s next with the course being open to a sale in the right situation he said their two tournaments that they host and support the Victoria Hospital Foundation in Prince Albert.

The four-person best ball event held in July raised $37,000 for the foundation this year. The annual Ray Ethier Tournament (a two-person event) is held every fall. Between the two tournaments Ethier said over $500,000 has been raised for the foundation.

“I want to be comparable; I want to be competitive,” he said. “The greens, the conditions, we do as good as job as anybody, we have a great layout, you never have the same shot twice, I tried to make you use every club in the bag, I hope I succeeded,” he concluded.