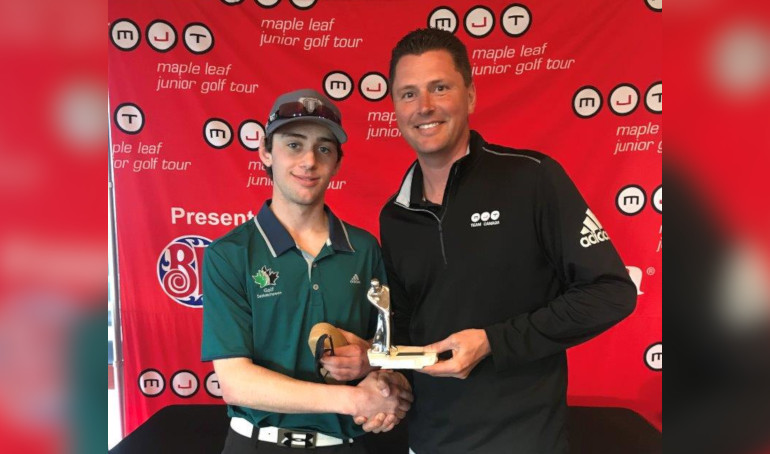 Jayden Dudas was the juvenile boy's champion at this past weekend's MJT event.

The busiest category was the juvenile boy’s division, 23 golfers from across the province challenged in the 15 and 16 year-old group. Estevan’s Jayden Dudas picked up the victory shooting 149 (77. 72). He edged Regina’s Will Blake by a stroke, Blake carded rounds of 76 and 74. Will Danielson of Saskatoon rounded out the top-three, seven shots behind Dudas.

Josh Nagy has his second junior (17 and 18 years old) boy’s division win on the season. The Saskatoon golfer posted rounds of 70 and 80, outlasting newly college committed Estevan product Jace Carlisle by five shots. Carlisle, who announced on Twitter this week that he will attend Lake Superior State University and play Div. II golf, shot 76 during round one and 79 on Monday. Kindersley’s Kyler Cote placed third with a 161 (85, 76).

In the under-12 boy’s category, labelled peewee, Dane Giesbrecht of Warman was the champion. He shot back-to-back rounds of 81 to card a 162. He edged Lethbridge’s Kerrick Norrie Asquith by one shot. Estevan’s Jayden Chernoff was third with a 179 (88, 91). Six golfers participated in that age group.

On the girl’s side, Carey McLean of Deer Valley won the 15-18 age division. She posted identical rounds of 85. Regina’s Autumn Neiszner and Sarah Grieve of Saskatoon were both ten shots back at 180. Neiszner had rounds of 91 and 89, Grieve carded an 88 on day one and 92 in the second round.

Ella Kozak of Yorkton was the only girl competing in the under-15 age group, she finished with rounds of 81 and 80 for 161.

The full results can be found here.

The points collected by the golfers in the event will be tallied towards Western Canada Summer Games (WCSG) standings for eligible players. The next Saskatchewan MJT event is back in Swift Current at the Chinook Golf Course, the host site of the WCSG.