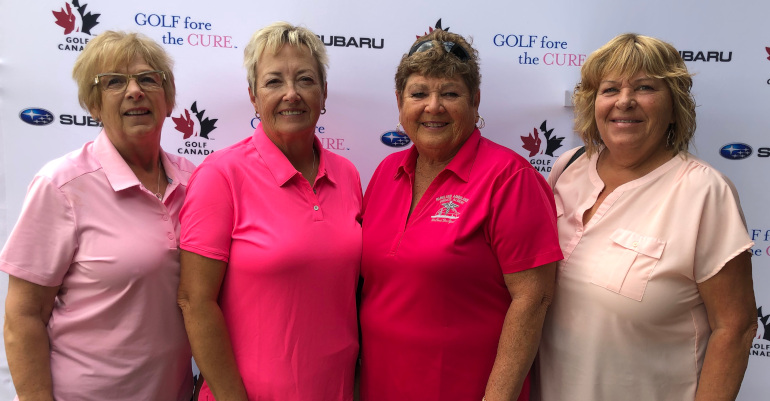 A group of ladies from Elk Ridge attended the national Golf Fore the Cure event on Sept. 23.

Once again, the Elk Ridge Resort Golf Fore Cure event was the top fundraising event of the year to battle breast cancer in Saskatchewan.

Chair Verna Schneider said they didn’t raise as much this year as the previous two events but, the support from the golf course and surrounding area is still strong.

“Yes, the support is still there,” she said. “A lot of business people from Prince Albert and north. We get golfers from Prince Albert, Candle Lake, Waskesiu, you know, those places. We had another good year; it was a little less than the two previous years. It was still over $20,000 which is good.”

This is the ninth year Elk Ridge has taken part in the national fundraising initiative. They surpassed the $100,000 mark in 2019. Schneider said for many area ladies, the event is a highlight on their calendar.

“For some of them yes, we do still have to work hard for golfers, that’s always been our problem,” she admitted. “Part of it is it’s on a Thursday in the summer, people have company and families or that type of thing otherwise most of the ladies from our club and the area support us.”

The top fundraising club from each province gets to attend the national Golf Fore the Cure event, this year it was held at the Mississauga Golf and Country Club. This is the fourth year a group from Elk Ridge attended. Schneider said the past three years the top raising foursome travelled to the event but the Dutchak family insisted the Elk Ridge organizing committee (Leigh Anne Nelson, Donna Dutchak, Debbie Klarenbach, Schneider) receives the experience. Schneider attended her first national event and said the trip was a fantastic time.

“It was good, we’re very happy, we had a very good trip to Toronto to the national tournament. Adidas is a wonderful sponsor, my goodness we came home with wardrobes,” she laughed.

The money raised through the program is distributed to the Canadian Cancer Society however, the Elk Ridge committee keeps their funds in Saskatchewan that has been used for various Saskatchewan Cancer Agency initiatives. Next year will be the final year that Elk Ridge will host the event. Schneider said they’ve had a great run, but all good things must come to an end.

“Everything reaches a time when you have to say okay, that was good. I think it’s time for someone else to do something else,” she said.

Elk Ridge was second in the nation this year, the host club in Mississauga raised over $32,000.