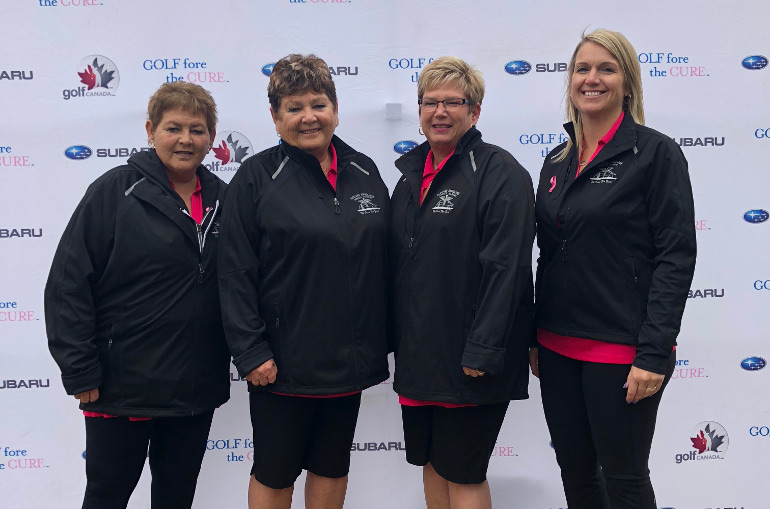 Every year the Elk Ridge Resort hosts a Golf Fore the Cure (GFTC) event at their golf course raising funds for breast cancer awareness and research. This year the one-day tournament and gala raised over $21,000, the highest in Canada. Co-chair of the local event, Donna Dutchak said they have had great support over the years the club has taken part in the national program.

“The $21,000 this year was the lowest that we have raised in about three years,” Dutchak said. “Verna (Schneider, co-chair) and I work really hard on it, the committee that we have works hard on it. We have a great group of girls out, everyone has fun and we raise money for a great cause.”

For the second year in a row a group from Elk Ridge was invited to the national GFTC event. Dutchak, along with Brenda Dutchak, LeeAnn Osler, and Coralee Dutchak attended the tournament in Thornhill, Ont. Last year when the group attended the national event they shared a table with a group from Manitoba and shared ideas for their local event. This year the group mingled with the top earning group from Sussex, N.B. Dutchak said their group were able to showcase the generosity of Saskatchewan at the event.

“We were the only Western Canadian team there, there was no one else from Western Canada whatsoever,” she beamed.

Dutchak said travelling to the event with her two daughters and daughter in-law makes the trip extra special. She said the team was also recognized for their participation in Ontario as well.

“It was really nice,” she said. “Everyone decorates their carts, it was a fun tournament. We brought all our decorations for our carts from Saskatchewan and we won the best decorated cart as well so that was nice.”

Plans are already underway for Elk Ridge’s 2019 GFTC event, Dutchak joked her and Schneider will co-chair for “one more year.”

Over the years of the event at Elk Ridge, the attendees and committee have raised over $80,000. All the funds raised stay in Saskatchewan and aid local patients. Nationally over $300,000 was raised this year through 175 local GFTC events.