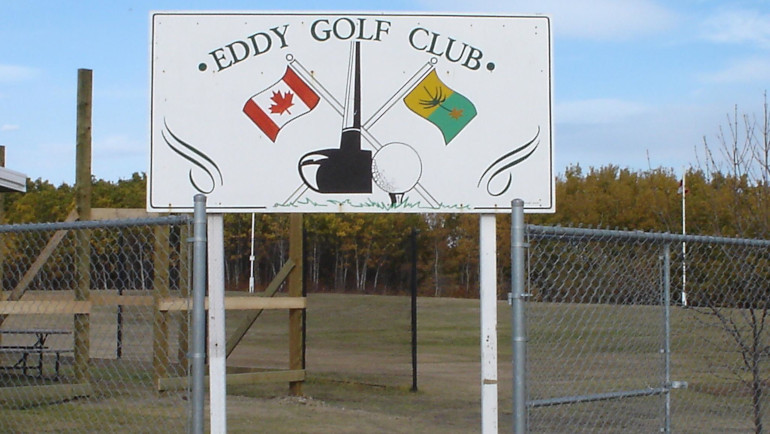 The Eddy Golf Club may be a small town, nine-hole sand green course but the local volunteers and over 200 members have big dreams.

Opened in the 1960’s as a six-hole course near Earl Grey, the 2,000-yard long club is now nine holes and very busy. Decade long board member Cam Fischer, who retired in the Earl Grey area after a career in Saskatoon said the course is a summer hub for golfers from as far as Assiniboia and Regina.

“People come from a long way away,” Fischer told Golf Saskatchewan. “Last year COVID-19 created a spike for us because people who had courses closed came here to just whack the ball around in a safe manner. It was surprising how many of them took out memberships because they realized it was a fun place to be.”

The club has expanded their cart shed from eight stalls to 32 to accommodate their growing membership over the recent years, the club has also built a covered community centre, firepit area and clubhouse over the last several years. Now the volunteers and board of directors are focusing on an irrigation project that will cost an estimated $70,000. Fischer said despite doing well for the area upgrades need to be done.

“If we have drought years like we’ve had for the last three or four years the grass is green in May but brown in June. We had enough money last year and put in a well. We have a pond that now holds 2.7 million gallons so it’s enough to act as our irrigation pond. Due to lack of water we needed a well and thankfully we hit a goldmine that produces 65 gallons a minute,” Fischer said.

The club, that sees upwards of 80 players a week for their men’s league in the summer said improving conditions will make a round of golf more enjoyable, especially at $10 a day on the honour system.

“We have brown grass, it would be nice to have a striped, 150 yards wide fairway that is actually green. That’s what we are trying to accomplish,” he said.

The club has raised about $7,500 of their goal for the upgrades. Work will start in the spring. They’ve already constructed a pumphouse and will finalize the well work. Fischer said the renovations have already showed progress in the conditions of the course.

“We have about eight water hazards, four of them have been dry for the last three years but we’re going to fill all those and part of our irrigation system is keeping them full all year,” Fischer added.

The club is establishing a donor Wall of Fame for anyone willing to assist in the fundraising initiative. For anyone interested in helping out, they can contact Fischer at 306-230-0548 or via email at eddygolfcourse@gmail.com.